I’ve always been many things, most of which are way, way outside the scope of my blog and site. (Trust me. There aren’t too many skeletons in my closet. There are no trysts with Hooters’ waitresses or big scandals.) As my regular readers know, I tend to write about consulting, project management, software and technology trends, and topics related to writing and publishing, many of which are peppered with Rush references.

This is a powerful book and one that had me mesmerized and cringing at the same time.

Spending so much of my time writing and reading about these things is not without its own rewards. However, I’d be lying if I claimed to never get a bit tired of covering all of those areas. I enjoy the occasional silly movie and book completely unrelated to the business of being me. One of my recent escapes was Methland: The Death and Life of an American Small Town by Nick Reding.

Before continuing, you may be wondering why I decided to read a book about meth. (No, book sales aren’t that bad and I’m not considering a career change.)

Hands down, my favorite TV show right now is Breaking Bad on AMC. It’s about a 50-year-old high school chemistry teacher with cancer, a pregnant wife, and a kid with cerebral palsy. Intent on providing for his family, he begins to manufacture meth or become a “cook”, as they are called. It’s just an amazing show and I wanted to learn more about the meth problem. 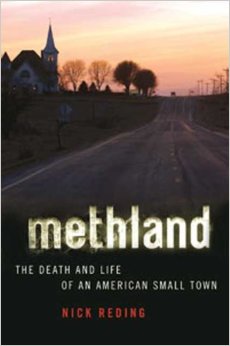 An accomplished journalist, Reding explores the methamphetamine epidemic in the United States through the lens of Oelwein, IA—a rural community about 300 miles from Chicago. Oelwein is vintage Small Town, USA, sporting a population of just over 6,000.

Reding did his research for the book—something to the tune of five years. While this is no scientific journal about the physiological effects of meth or “crank”, there’s enough of that information to, quite frankly, scare the hell out of you. Particularly disturbing were the stories of the children of meth addicts born with simply horrible problems. It’s just scary. Even if there were actually a number of crystal meth addiction centers in the area, they wouldn’t be able to do much about these horror stories.

Methland is anything but a “drugs are bad” or “just say no” kind of book. Rather, Reding explores the economic, political, and sociological factors that contributed to the rise of crank in this country. While not exclusively to blame, for example, pharmaceutical companies’ lobbying against certain legislation contributed to the rise of meth addiction. Long story short: the industry fought “stop-buy” language that would have prevented individuals from buying massive amounts of Sudafed and other medicines typically bought en masse to produce meth.

Reding also touches on touchy subjects such as the legality of drugs and America’s relationship with immigration—legal and otherwise. These are all important in understanding why “the world’s most dangerous” drug reached epidemic proportions in this country.

The Downside of Globalization

Having studied the effects of globalization in college and attending school in Pittsburgh (a city no stranger to the erosion of its industrial base), the book certainly resonated with me. What do people do when wages go from $18/hr to less than one-third of that? Many try to work more and meth evidently enables that. On a different level, at one point (and I’m paraphrasing here), an unemployed and depressed Oelwein addict makes the argument for meth, saying, “What else makes me feel good here?” It’s a hard question to answer for Reding or anyone else.

This is a powerful book and one that had me mesmerized and cringing at the same time. This isn’t light reading but, if you need the occasional escape from your daily grind, it should be right up your alley.

What books have you read that allow you to escape?