Thoughts on an increasingly important question.

In my last post, I argued that many organizations suffered from antiquated tech infrastructures that enhanced startups’ inherent advantage. The results are often disastrous: The recent Yahoo! deal proves that no company—no matter how iconic—is guaranteed a permanent seat at the table.

I’ll be the first to admit that organizations cannot significantly alter their tech infrastructures overnight, much less willy-nilly. Contrast this with the widespread software development orthodoxy. Agile methods and lean principles allow proper developers and DevOps folks to add features in an iterative way. If something breaks, then they fix it. It’s hard to think of complex “back ends” in a similar manner.

Still, there’s no doubt that, compared to prior decades, infrastructures are more flexible than ever—or at least they can be. To explain why, a little history lesson is order.

The Rise of Cloud Computing 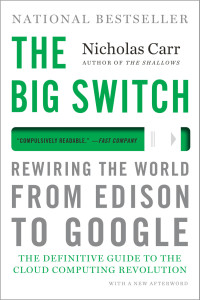 Remember that up until the early 20th century, most large American companies produced their own electricity. (No, I’m not kidding.) Eventually, however, they realized the silliness of this practice and relented. Rather than worrying about power supplies, they generally focused on their core competencies. (For more on this, see The Big Switch: Rewiring the World, from Edison to Google by Nicholas Carr.)

A similar shift is taking place thanks to the rise of cloud computing—and has been for a decade now. Today, it’s never been easier and less expensive for organizations to add compute power. With a few clicks of a mouse, organizations can provision additional resources. What’s more, unlike the 1980s and 1990s, they need not host all of their own servers onsite. Finally and perhaps most important, organizations can change the way in which they account for their technology. Operational expenses replace capital expenditures. (If you think that this is simply a meaningless accounting exercise, think again.)

All of this beg the questions, So what? Why does any of this even matter?

All companies are becoming tech companies.

Put simply, the business world has never moved faster. All companies are becoming tech companies. Also, as I write in Too Big to Ignore, Big Data is no longer the luxury that it once was—and I’d put its cousin analytics in that same boat.

Playing around in Excel with lists of customers, sales, employees, and other structured transactions simply won’t cut it anymore. Without tapping into large amounts of unstructured data, organizations will not be able to understand critical customer, employee, product, and business trends. Ditto for new data sources. But how many organizations’ current infrastructures can store this data—much less analyze it—in a meaningful way?