The Future of DevOps

In my last post, I argued that DevOps is no panacea for bad tech, obstinate employees, and a toxic culture. Today I’ll look at the future of DevOps. In a nutshell, it’s bright.

I’m often critical of organizations and executives that cling to antiquated systems, infrastructure, and methods. In truth, however, I understand all too well the difficulty of making these types of wholesale changes. (I wasn’t always a college professor; I spent many years implementing enterprise systems.) There’s always risk with replacing a working—if deficient—application for a potentially better—but unproven—alternative. Brass tacks: Change is hard.

Ask CTOs in “tech-challenged” firms if they could wave magic wands and start from scratch. Knowing now what they didn’t know then, would they do things differently?

I suspect that all but the most hidebound execs would say yes. Given the risk of failure, few want to be known as the ones who saw new systems and infrastructure fail on their watch. When it comes to DevOps, cloud computing, and the like, most won’t be early adopters, but most will keep an eye on what’s happening. Perhaps they’ll be fast followers. 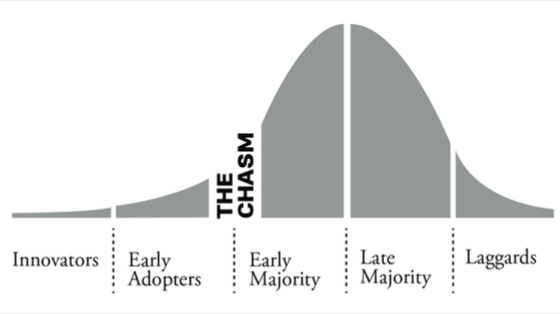 The Winds Are Swirling

But what about applications with a modern-day flavor? That is, what about those that don’t need to replace older, clunky ones? Lest you think that we’re talking about a small number, consider the following fascinating statistic: by 2020, cloud computing will drive nearly one-third of new enterprise apps. To paraphrase Jeff Bertolucci:

As organizations and their employees become more comfortable with (more) modern tech practices and tools, they become prime candidates not just to try DevOps—but to successfully adopt it. It’s not hard to envision a virtuous cycle in which successes cascade throughout mature organizations. Case in point: Consider Brad Surak and his work at General Electric. (Surak currently serves as GE Digital’s COO.) He has been instrumental in getting GE to think less than a 125-year-old industrial powerhouse and more like a contemporary DevOps organization.

Even successful organizations can’t fight change forever. As the ascents of Uber and Airbnb suggest, disruption happens faster than ever. (To be fair, research here is mixed.) Firms that can’t quickly respond to emerging consumer and tech trends run the risk of irrelevance, obsolescence, or even extinction.

I can see a future in which adopting DevOps is necessary but not sufficient for success. Put differently, as a classic hygiene factor, doing IT well won’t ensure a thing. Doing it poorly, though, is a recipe for disaster.