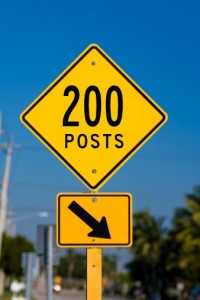 I suppose that this is some sort of an accomplishment. The post that you are reading is my 200th. It’s time to do my first “State of My Site” post. Because of the occasion, I’m allowing myself this indulgence. Without further ado …

Random Facts about My Posts

I write about quite a few things. I took a look at some of them:

I can never predict which posts will be popular. According to my WordPress statistics, these are the most popular.

George Orwell and Why I Write and The Big Lebowski and the State of Book Publishing come to mind.

I will be tackling more small business issues, as they will be the focus on my upcoming third book.

The number 200 has a storied history. According to its Wikipedia page, two hundred is:

While I write for my own amusement (and to save money on psychiatrists), I want to thank you, the reader. I really appreciate the comments, retweets, mentions, Facebook likes, Diggs, and other references.