Celebrating the Four-Year Anniversary of The Age of the Platform

On this day four years ago, the first edition of The Age of the Platform Hit the shelves. (A revised edition Followed about 18 months later.) Now seems like as a good time as any to put a few thoughts down commemorating its anniversary.

To be sure, my previous three books had sold reasonably well despite considerable obstacles. In hindsight, however, my timing wasn’t optimal. Technology was front and center with those three texts. Unfortunately, the US was in the midst of its greatest recession since the Great Depression. The period of 2009 to early 2011 was not the ideal time to start writing about tech. Second, I was a new author who hadn’t really established a strong personal brand or media presence.

That all changed with The Age of the Platform. The book struck a chord with readers curious about how Amazon, Apple, Facebook, Google, and many other successful companies have built their businesses. Many startups, small businesses, and mature organizations wanted to learn more about platform thinking. (Lord knows the former certainly love misusing the word.)

Even to this day, the book sells relatively well—hardly easy to do in an era marked by rampant technological change. I currently tally roughly 20,000 sales.* More than 100 people have reviewed the book on Amazon.com, the large majority of which are positive. My favorite review calls the book seminal, something that brings a smile to the face of every business author. 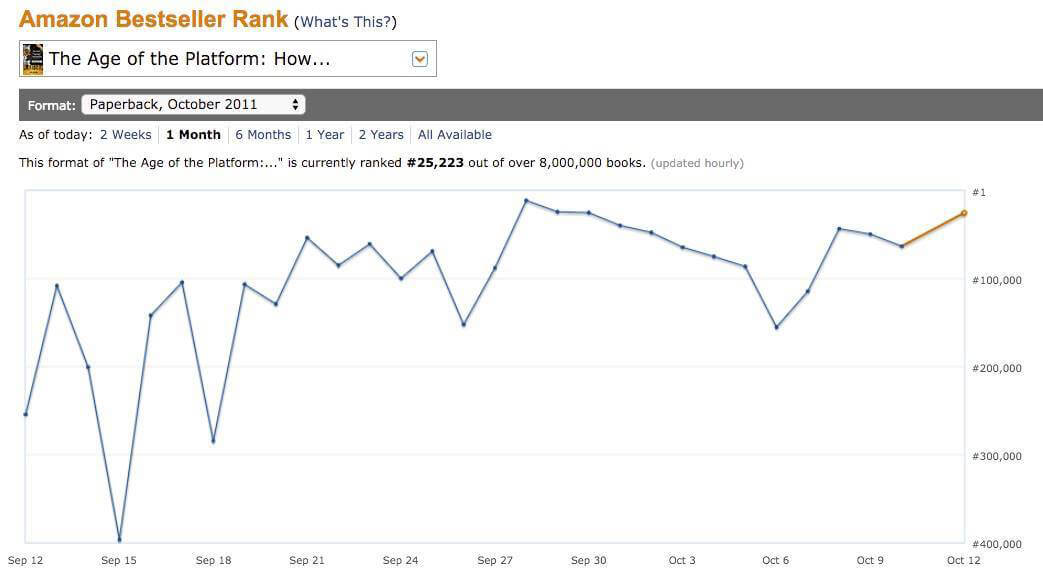 I find platforms inherently fascinating and have plenty more to say on the matter.

Within a month of the book’s publication, I started to break through. I began giving proper keynote talks to a wide variety of organizations, associations, and conferences. In many cases, organizations ordered hundreds of copies of the book. (For a smattering of my talks on the subject, click here.) What’s more, I met some other smart cookies who have done important research on platforms, most notably Marshall Van Alstyne. He’s currently working on his own book on the subject.) Inc. and The Huffington Post came calling with offers to write columns. The book won an Axiom Award and, at present, three international editions have followed it.

I guess that stubbornness pays off after all.

To be fair, though, there has been a downside—not that I’m complaining. None of my other books has sold as well, leading some in the publishing world to wonder if I have peaked. Maybe I’m the literary equivalent of Pearl Jam’s first album?

Perhaps ironically, I’m barely use the word platform in everyday conversation even though their importance today is undisputed. Many companies, consultants, and talking heads have bastardized the word and effectively rendered it meaningless. My skin crawls when I hear about next-generation omni-channel platforms and other utterly vacuous terms. (For more on this, see Message Not Received.)

In a way, though, the fact that I can communicate simply and sans jargon about platforms has been a boon. I doubt that others would be as interested in my thoughts on the subject if they were so unnecessarily opaque.

As Microsoft, Yahoo!, and BlackBerry know all too well by now, embracing platform thinking guarantees nothing. More than ever, speed ills. These companies’ missteps have cost it dearly, and they are either playing catchup or have become effectively irrelevant in key areas. (Exhibit A: Microsoft’s nearly nonexistent market share in smartphones.)

Still, I find the topic inherently fascinating. Although I’ve penned more than 240 posts on the subject on this site alone, I have plenty more to say on the matter. I’m no sorcerer, but I suspect that we’ll still be talking about platforms four years from now.

* Many of these are not reflected in BookScan.