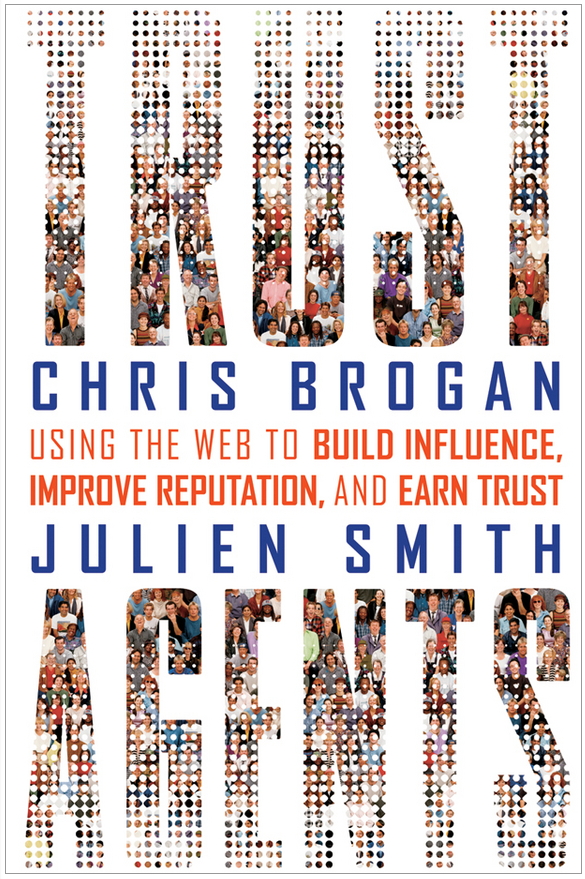 As my friend Jill Dyché writes in the foreword of my next book, social media is a “piping hot” topic these days. Upon the recommendation of my other friend Jim Harris, I bought and read Trust Agents: Using the Web to Build Influence, Improve Reputation, and Earn Trust by Chris Brogan and Julien Smith. I reviewed Chris Anderson’s Free last week and, for those of you who think that I should get out more, you’re right. Case in point: I seem to only have two friends and you just “met” both of them.

Up until recently, my book consumption process has been as follows:

Things are changing in The Land of Simon these days. I seem to be picking up Jim’s habit of accumulating many books at a time. Due to my recent back injury, I have had more time recently to attack the stack. In other words, I now have more choice about which book to read next in my pile. I’m glad that Trust Agents was in that pile.

Brogan and Smith detail the many ways that one can use the Internet in general–and social media specifically–to establish a web presence, promote your wares, and build a brand. They’re justifiably big on collaboration. Trust Agents describes how one can “build an Army” using both technology and networking tools such as:

If I had read this book a year ago, the content would have been more revelatory. Since I’ve been paying close attention to social media over the last year, some of the book’s concepts merely reinforced what I have learned in that time. This is not a criticism of the book. It’s just that I wasn’t exactly a blank slate going in and, for certain people, the book’s content won’t exactly be eyeopening.

Case in point: I recommended it to my chiropractor mid-adjustment this past weekend. This is not to call him a “blank slate.” Ticking off the guy who fixes my back is probably ill-advised. (Throw dentists, barbers, and IT folks into that bucket as well.) My only point is that my chiropractor spends his days healing people’s backs, not figuring out how to most effectively use Twitter.

I do have a couple of gripes. First, towards the end of the book, Trust Agents begins to repeat itself a little too often to my liking. To be fair, as Jim pointed out to me on the phone the other day, the authors write early on that this book need not be read in a traditional fashion–i.e., from beginning to end. It can be read piecemeal. To that end, you won’t feel lost if you just read the final chapter in and of itself.

Second, many of the case studies on the uses of social media used are important but a bit hackneyed.  The success stories of Comcast and wine guru Gary Vaynerchuck have been told many times before. If you already know about them, then you may want to skip them.

Reading Trust Agents left me with the same feeling that I had thirteen years ago after reading the classic book How to Win Friends and Influence People. Most of the material I knew at some level; reading it reinforced what I knew. While I may not have learned a great deal reading the book, reminders about important concepts are probably good for me.

Next book review: Scott Berkun’s Confessions of a Public Speaker.