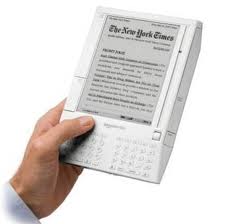 I am always fascinated by technology and change. I often think about one of Kranzberg’s laws of technology, one of which is:

Technology is neither good nor bad; nor is it neutral.

Along these lines, there’s an interesting article from the Brookings Institution on how Amazon’s Kindle is manufactured:

…$40 to $50 in manufacturing value made off of every one of the 700,000 or so Kindles so far sold isn’t bad, and Amazon seems well-positioned to capture the retail mark-up on the device and sell a ton of e-books, while Kindle’s wireless data service, which uses Sprint’s data network, resides in the U.S. Well, here’s the problem: Because E-Ink could not control the low-temperature polysilicon and the fabrication of the display, it could not perform the system integration required for it to capture the majority of the value-add at that stage. And because it could not manufacture the display, as Shih notes, the U.S. will likely miss out on the future industries that may spring from shop-floor tinkering with the display and its production–“things like large flexible displays, future generations of electronic signage, and plastic electronics.”

Amazon needs to go to countries that can produce e-Ink at the lowest possible cost. Don’t we consumers demand this? I’ll bet you a coke that the company sells more Kindles at $139 now compared to the Kindle 2’s original price of $359.

I have mixed feelings about this piece. The article omits the fact that many companies and industries intentionally take losses on products. Perhaps the best example is the razor. Manufacturers have been known to give them away because the profits on blades more than offset the “loss” of free razor. If this article’s breakdown of the Kindle cost structure is accurate, then the same thing is happening with books: Amazon can lose money on the Kindle because it will make it up–and then some–by selling books.

This begs the question: Does any of this matter? If Amazon.com makes $5/book on the Kindle (and that’s probably a fair estimate), then what’s the problem? For Amazon.com, probably none.

For the US, that’s a different story. However, the Kindle is hardly the only example of a product not entirely made in the USA. I went to school in Pittsburgh, a city decimated by the deinstrialization of the US. It has since rebounded–sort of.  Without getting all philosophical, with Capitalism, the fleas come with the dog. What’s good for a company may not be good for the country. How is this different?