At ASU, I taught an annual 4/4 course load and summer classes to boot. The schedule kept me busy and the environment was often challenging. Still, I made time to do more. Here’s a list of my extracurricular activities. Brass tacks: Let’s just say that ASU got its money’s worth. 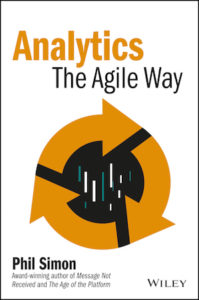 Soon after my first semester concluded, I began working on Analytics: The Agile Way. My boss—the department chair—assured me that I could use the book in my analytics course. I started writing in earnest in early March of 2017 and finished the manuscript by the end of the month. (For more on my motivations for writing the book, click here.)

Wiley published the text in June of 2017—just in time for the summer session of the course.

Beyond my most recent book, I continue to contribute frequently to different websites. Here is my latest from HBR. (That piece will also appear in the book Agile: The Insights You Need from Harvard Business Review.) Beyond that, up until very recently, I chimed in at least once per month on the SAS Data Roundtable.

In August of 2019, I signed a contract to Slack For Dummies. Once again, Wiley will be publishing the book with a April, 2020 publication date.

I completely retooled the in-person version of the analytics capstone course (CIS450). I developed ten in-class exercises that promote active learning. Thanks to those and plenty of real-world case studies, by and large students have responded positively.

Beyond that, I developed the seven-week online version of the course based in large part on Analytics: The Agile Way. I recorded 34 lectures and created all of the quizzes, YellowDig content, assignments, and rubrics.

Phil has significantly updated the analytics capstone course over the past two years. Specifically, he restructured CIS450 around an Agile approach to problem solving via analytics. As a result, the course is now a lot stronger and more relevant to the major.

It turns out that reporters sometimes want to talk to professors. Who’d have thunk it? Here are some of my most prominent mentions since becoming a college professor:

In December of 2017, I decided that it was time for me to up my Python game. Up until that point, I had known a decent amount about what the popular general-use programming language could do. Still, I never really rolled up my sleeves and started coding. Why not use my break to finally give it a shot?

Fast forward three weeks. I certainly didn’t qualify as a proper data scientist, but I knew much more about Python than I did two years ago.

It turns out that my continued quest for knowledge paid dividends pretty quickly. For one, I was able to better answer some of my analytics students’ more technical questions. Beyond that, in the fall of 2018, I started teaching four sections of CIS236: Introduction to Information Systems (Honors). In that course, I cover many topics, including two weeks of (you guessed it) Python. Click here to see a simple program Breaking Bad–inspired program that I wrote.

I also taught myself Tableau and Microsoft PowerBI. With respect to the former, I’m no Ryan Sleeper, but I can hold my own.

Beyond adding a few new technical arrows to my quiver, I’ve read a bunch of books about the challenges confronting higher education. There’s no doubt that colleges and universities face a number of obstacles these days—especially due to shrinking state education budgets. What better way to prepare for them than by feeding by brain?

Reaching Out to Other Students

In the Fall of 2019, I started holding open twice-weekly sessions for all ASU students. The goal: To encourage them to think about the effects of technology on business, society, and the world. Read more about it here.

Get busy living or get busy dying.

Helping Dozens of Organizations Improve their Technology and Analytics Efforts

Because of the way that I conducted my capstone classes, my students and I helped dozens of organizations through semester-long capstone projects. Sure, when I started, I was able to take advantage of some of ASU’s existing relationships with local organizations. Unfortunately, the increasing size of my classes meant that I had to find most of these independently.

I am proud to have cultivated dozens of new relationships that led to many meaningful projects. I relied upon:

As I know from personal experience, finding rewarding projects for my students isn’t easy—particularly in the analytics realm. Many senior leaders at organizations are justifiably squeamish about handing over their data to a bunch of students whom they don’t know. Still, I was able to offer my students a minimum of four project choices each semester and sometimes twice that number.

As part of Barrett (ASU’s Honors College), I have supervised a number of individual and group student theses and projects. I enjoy being able to guide my students’ work, challenge them, and offer valuable feedback.

I have taught summer at least one summer course during each of my three  years of ASU.

Participating at Other ASU Events

Yes, I spend much of my time in and around the W. P. Carey School of Business and the Department of Information Systems in particular. Still, I consider my research and interests interdisciplinary in nature. To this end, I reach out to other schools at ASU—and respond when they reach out to me.

For instance, I spoke at the Fulton School of Engineering on The Age of the Platform as part of the Live @Generator Labs series. (See the video on the right.) I also appeared at ASA DataFest as a mentor. Think of it as a hackathon for data.

So what does a good teacher do? Create tension—but just the right amount.

I managed a seven-month engagement with one of ASU’s largest clients. Chemonics is a large multinational non-profit organization that faced significant data and logistics issues. With a small team of my best students, we built a Microsoft SQL Server database in Azure and an Access-based dashboard/front end.

Although the project was challenging, we came in 40 percent under budget and ahead of schedule. (As I know from a decade of working on these types of projects, that is a rarity in the IT world.) What’s more, my team delivered far more functionality than the client had originally requested. In September of 2018, Chemonics announced that the project won an innovation award from USAID. Click here to learn more about the project.

I have faithfully served on the following undergraduate sub-committees at ASU:

What’s more, I served as the course coordinator for both the CIS and BDA capstone courses (CIS440 and CIS450, respectively) from 2016 until 2018.

In my time at ASU, I have built a reputation as a tech-savvy professor. As a result, it’s not uncommon for folks to solicit my feedback. I’m happy to oblige. Several times I provided input on the direction of Pitch—ASU’s since-abandoned attempt to create a Slack equivalent. I suppose that I was in a unique position, as I’m one of few professors in the business school who uses Slack in the classroom.

I also volunteered as the first professor in my department to adopt Canvas. For a long time, ASU used Blackboard as its learning management system (LMS). In the summer of 2018, I made the jump and provided valuable feedback to our instructional designers. They told me as much.

I read a great deal about issues related to my new field. Because I’m a sponge, eventually I bet that I’ll write a book about my new profession. In the interim, I’ve penned dozens of posts about higher education. From my site statistics, I know that these observations aren’t falling on deaf ears. The Chronicle has linked to a fair number of my musings.

RETURN TO MY ACADEMIC DASHBOARD