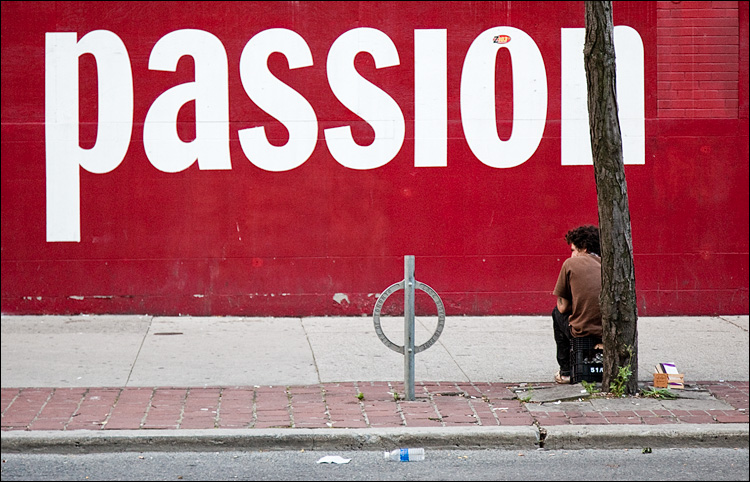 No, it’s not just a Rod Stewart song.

When I think of passion (especially during football season), people like Mel Kiper and Mike Valenti spring to mind. These are clearly people who enjoy what they do for a living.

I had the privilege of talking to 11 really driven and passionate folks when writing The New Small. It just seems that folks who are truly passionate tend to be better at what they do than those of us who just mail it in. I know that that holds true for me.

I recently caught up with a friend of mine who had been laid off. He had worked for nearly a decade at the same company doing sales of cellular phones and plans to corporate clients. Let’s call him Terry here, although that’s not his real name. To Terry’s credit, he didn’t look at being laid off as some type of death sentence. Rather, he was viewing it as an opportunity to do something that really got him going in the morning.

In the course of our conversation, Terry said that he admired what I have done over the last few years on the writing front. Terry knows that I’m passionate about technology and, blessed with crazy typing skills and an inordinate number of opinions, churn out a great deal of content. What’s more, I like doing it. While he’s not passionate about the same things as I, he wants to have the same purpose and derive the same enjoyment from his job.

You can take a step towards a better career or job today.

This is always nice to hear. For me, I wasn’t always passionate about how I made a living. I remember working in corporate HR in 1997 after grad school. HR just wasn’t my cup of tea and I really did look at it as a job. I quickly turned to more technology-oriented work because I was simply more interested in it—and better at it. My passion for systems made me more successful and helped get me to this point in life.

Not everyone is motivated by the same things. Different strokes for different folks, as they say. While your current job or career may not float your boat, you can take a step towards a better career or job today. I don’t know of anyone who has gone from a boring, dead-end job one day to a fulfilling, exciting one in a day, week, or month. Don’t let that stop you. Figure out where you want to be and a plan to get there. You’re going to enjoy the journey—and the final destination.

What say you? Are you passionate about what you do? Why not?

Why I Never Describe Myself as Results-Oriented

Call me persnickety, but this trite phrase really grinds my gears.