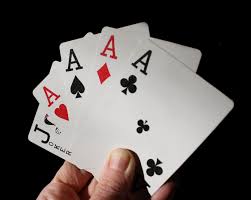 In poker, sometimes you fold the best hand. In certain situations, it just doesn’t make sense to call, even if you might have your opponent beat. Its just a fact of life when you play cards.

While some people have a problem leaving money on the table, advanced poker strategy requires trade-offs like this to advance the greater good.

I was thinking about that the other day in the context of IBM exiting the PC business in May of 2006. (It turns out that the company may do the same with servers.) Were there critics at the time? You bet. Ultimately, however, it turned out to be the right move. There’s just more money to be made in services and more advanced hardware (read: Watson-like devices).

Sometimes you need to fold the best hand.

Fast forward seven years. PC sales are plummeting. What’s more, they will probably get worse in 2013 and beyond. Windows 8 hasn’t revitalized sales. In fact, some people blame the newly released operating system for exacerbating the decline of the industry.

Whether that’s true is anyone’s guess. Still, do you think the top brass at both Dell and HP wish that their companies had been so prescient? How much would each give to turn back the clock? Today, each company is trapped with no easy solution. It can’t get away from the very thing that it ought to be getting away from. It’s a classic case of The Innovator’s Dilemma.

Business is always uncertain. Changing your company’s business model, retiring legacy applications and technologies, launching new products, or establishing new partnerships all inhere significant risks. The era of Big Data has not eliminated uncertainty and risk–nor will it.

There’s a larger lesson here for technology strategy: Sometimes you need to exit a profitable business although you’re leaving money on the table. It’s not unlike folding the best hand in poker. Losing the occasional battle is necessary if you want to win the war.

On ChatGPT, Duplicability, and Citizen Development

Thoughts on the AI tool that’s all the rage today.

Characteristics of the Modern Citizen Developer

A quick infographic to answer Seinfeld’s immortal question, Who are these people?

Why I specifically avoided a few key topics in the new book.