Amazon: Under the Radar? 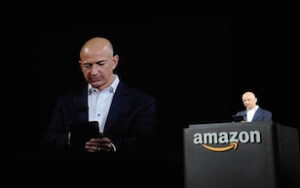 Apple just missed earnings’ estimates for the second time since Steve Jobs’ death. Facebook just got hammered because Zynga disappointed as well. (In the book, I write about the symbiotic relationship between the two companies.) Google is facing a bevy of monopoly charges in Europe and a settlement is evidently near.

Yet, we don’t seem to be hearing that much these days about Amazon.

And, something tells me, that’s exactly the way that Jeff Bezos likes it. Platforms like his keep humming along.