My Mac Transition, II: Getting Stronger 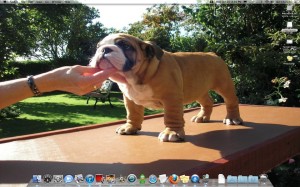 In my post last week, I kicked off a series detailing my transition to the Mac from the PC. Now it’s time for Part II of my odyssey.  I am probably further along than I would have thought for one simple reason: my Sunday plans of watching my fantasy football team wreak havoc over my clown of an opponent went awry. (As an aside, I have routinely have started this year just about the worst combination of players. )

Frustrated with my consistent ability to pick the worst players, I went straight from the bar to the local Barnes & Noble.  Armed with my newly bought David Pogue Missing Manual, I knocked down 50 pages of my new and highly useful book. I’m like a sponge for this kind of thing.

There are so many ways to access programs that’s it can be a little overwhelming. Consider three:

I am also loving the ability to customize the background of folders with colors and pictures. Windows 2000 used to have this feature but they removed it in XP. It appears as if you can change just about anything and, since I’m a big shortcut guy, assign a combination of hotkeys to routine tasks. (And I haven’t even finagled with the Automator yet.)

Like the great Chicago song, I’m feeling stronger every day.

One slight annoyance: As a writer, there’s no forward delete key, although you can use FN+delete (function delete) to mimic this functionality. It’s not a big deal and I suppose that I just have to deal with it.

So far, the Mac hasn’t crashed once. Ironically, as I was finishing this post, I had my first crash! Of course, this was only Firefox, not the Mac.

Like the great Chicago song, I’m feeling stronger every day.

At the same time, though, I have to remember my own moderation issues when I pick up a new toy. Enthusiasm aside, it took me a really long time to get anywhere remotely good at golf. Also, when I was 19, I bought a bass and told my teacher that I wanted to play Rush. He laughed and started me off with much simpler music, such as U2 and The Police. I’m sure that I’ll digest most of this new functionality but, in the interim, I’ll need to take my time.

Overall Mac grade so far: A.