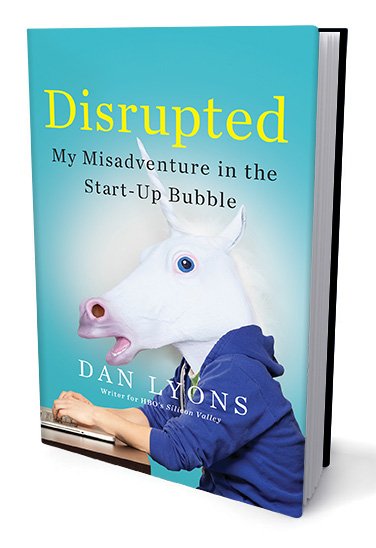 What do you get when you put a fifty-something ex-Newsweek reporter in a startup environment rife with new, mostly white college graduates? I was curious, so I read Dan Lyons’ How about Disrupted: My Misadventure in the Start-Up Bubble.

Based on the title, subtitle, press, and excerpt I had read, I knew how the book ended. Still, right off the bat Lyons hooked me with his outrageous tales from his time at marketing unicorn Hubspot. Faced with few opportunities in traditional media and two young children, Lyons takes a position as a nebulous “marketing fellow.” Almost immediately, he finds himself completely out of place at a company plagued by horrible jargon (delightion and 1+1=3 made me die a little inside).

I can see how Lyons’ style can rub some people the wrong way. He’s not above throwing former colleagues under the bus and his language is often colorful. As someone who has worked in similar milieus, though, his observations certainly reminded me of some professional days that I’d rather forget. Lyons spares no one, but Hubspot’s (mostly female) blogging team comes across as particularly puerile and vindictive. Ditto for “Trotsky”, his former boss.

I highly recommend the book to people curious about what could very well happen to them.

Lyons’ tone throughout the book isn’t necessarily bitter, but he doubtless holds a few grudges about the way that his former colleagues and bosses treated him. I would too. For the most part, I found him humble and self-reflective. At times, though, he is downright scathing. Against this backdrop, a few Hubspot execs resigned over a potential hacking scandal related to this book, something that certainly will help Lyons’ book sales.

It would be incomplete to classify Disrupted as merely an Office Space-esque critique of Corporate America. It also serves as important social commentary about the way that more senior employees are viewed and valued in a hyper-agressive startup culture hell bent on an IPO. In other words, you will both laugh and think.

I consumed the book in less than a day and highly recommend it to people curious about what could very well happen to them.

Disclaimer: Hachette Books sent me a free copy for a potential review or interview.

Originally published on HuffingtonPost. Click here to read it there.