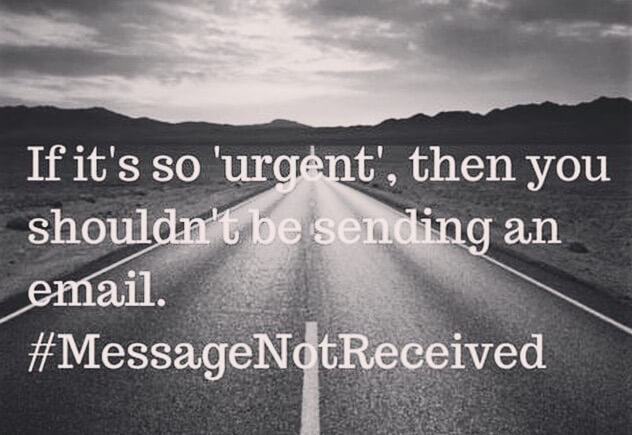 Over the last six months, some of my clients and friends had told me that I intermittently wasn’t responding to some of their messages. Twitter also wasn’t alerting me to direct messages (DMs). Oddly, the problem seemed to be exacerbating, and last week I finally decided to play data detective to figure out what was going on.

It turns out that Google Apps was incorrectly marking legitimate messages as spam—quizzically, these included responses to existing e-mail threads. (A very good friend of mine comically noted that Message Not Received must have angered the e-mail gods, and they were exacting their revenge.) To boot, the affected messages weren’t forwarding into my personal Gmail account as spam. (I periodically check my personal spam for false positives.) Google was blocking them.

If the medium is the message, then why is there such a thing as an urgent e-mail?

I solved the problem by moving the MX records of my business e-mail account to another provider, but there are several lessons. Even mature, robust e-mail services aren’t bulletproof. Yes, e-mail is extremely reliable, but foolish is the soul who believes that it’s infallible. Sometimes, messages aren’t received.

Occasional and annoying glitches aside, there’s a much larger point here. Let’s say for the sake of argument that the medium is the message. If that’s the case, then why is there such a thing as an urgent e-mail?

New rule: If an issue truly is urgent, then you cannot send an e-mail. Opt instead for the phone.

I know what you’re thinking: What if things break bad and I don’t know the phone number of [insert name of person or organization]? Allow me to retort: If you’re working on a critical project, then why didn’t you ask for that number in the first place?