Zoom Education at the Bank 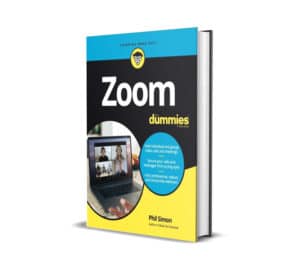 You can write a whole book about Zoom?

Even behind her mask, the woman’s voice was unmistakably incredulous—and, to be fair, she was hardly the first person to ask me that question.

By way of background, I visited a local bank the other day. I had to sit down with a manager to talk about one of my accounts. The fiftyish woman asked me what I did for a living. As usual, I answered that I wore a few hats, but for the time being I primarily label myself as a writer, trainer, and speaker.

Ostensibly impressed, she asked about my books and I told her that Zoom For Dummies was my latest. Like more than 300 million other people, she uses Zoom—but only for attending meetings.

Hence her question at the beginning of this post.

Without overwhelming her, I briefly explained1 to her that simple meetings represented just the tip of Zoom’s iceberg. The 400-page book easily could come in at twice that length given Zoom’s robust set of features. She seemed genuinely intrigued and responded that she’d like to open up my brain and see what’s inside.

While that wasn’t not possible, I mentioned that Zoom For Dummies was the closest thing. I suspect that she’ll be buying a copy of book.

It’s an understandable misconception, but Zoom is so much more than just a better version of Webex. I’ll bet that Zoom For Dummies helps convince many dabblers of Zoom’s power and ease of use.