Visualizing Mice and Rats in Manhattan

Last time I was in New York, I couldn’t help but notice this Yelp dataviz for a dry cleaner. As one might expect, there are plenty of other ways to visually represent interesting data in a city as big as New York. What about looking at the concentration of reported mice and rats by zip code?

Over at The Gothamist, Steven Melendez did that very thing. Melendez created the appetizing map shown below: 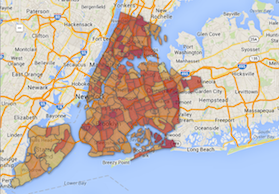 Click on the image to go to the live, interactive dataviz.

From the article, here’s a bit on Melendez’s methodology:

(He) took restaurant inspection data from the Health Department and looked at all the inspections since Jan. 1, 2013. Then he counted the total number of inspected restaurants and number of restaurants that received citations for “evidence of mice or live mice” or “evidence of rats or live rats” in that time period for each zip code. Then, for each zip code, he added to the info window any restaurant that currently has a C grade and was cited for mice and/or rats in its most recent graded inspection.

This type of data simply wasn’t accessible even five years ago.

As I write in The Visual Organization, the notion of open data has been gaining traction for a while now. Foolish is the organization that only looks at data within its walls. It’s never been easier and more important to augment traditional data sources with supplemental ones external to the enterprise.