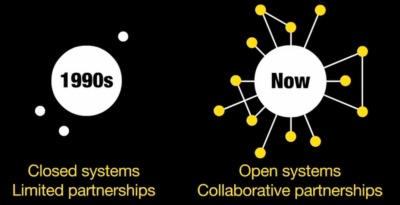 In this three-part series, I’ll look at a term that we’ve all heard with increasing regularity over the past five years: the platform. Today I’ll provide an overview of the modern-day platform with a particular emphasis on Amazon, Apple, Facebook, and Google—aka, the Gang of Four. In the second post, I’ll discuss the data that today’s powerful platforms generate. In the final installment, I’ll provide some data-management advice related to platforms.

By way of background, in 2011 I wrote The Age of the Platform: How Amazon, Apple, Facebook, and Google Have Redefined Business. The book looks at the ascension of four consumer-oriented companies, and I’m hardly the only one who has noticed them. For instance, Google Chairman of the Board Eric Schmidt has often complimented the Gang of Four’s ability to build sticky and innovative platforms. In fact, these companies rule the tech world. That is, they have built the tools that enable others to create apps, games, and services on top of those platforms. (In the book, I refer to these as planks.)

It’s critical to note that  I love the companies, but do you know anyone who’s developed an app or a game for them? Neither have I. In this sense, neither company is a true platform.

Platforms differ from traditional brick-and-mortar businesses as well. Go into Target and buy whatever you like. You don’t sell anything there. In this sense, platforms are not one-sided.

The obvious question is, how do these companies create what economists call multi-sided markets? From a technology perspective, the most powerful platforms today use open application programming interfaces (APIs) and software development kits (SDKs). In so doing, they create vibrant ecosystems. For instance, although Steve Jobs was a true visionary, I have a hard time believing that he expected Angry Birds to be downloaded more than 40 million times by 2010.

While only a single data point, the Angry Birds example demonstrates perhaps the primary advantage of the platform: external innovation. Imagine the financial and human resources that Apple would have to devote to creating “the perfect” apps?

Amazon, Apple, Facebook, and Google typically take 30 percent from sales, whether its an app, game or an e-book. By offering developers a 70 percent cut, these companies heavily encourage innovation from third-party developers.

Finally, platforms exhibit additive qualities. That is, developers routinely build upon the work of others. When they see what their colleagues have done, new ideas spring to life. The adjacent possible expands.

Amazon, Apple, Facebook, and Google are far from the only platforms of import. Twitter WordPress, Force.com, and scores of other companies have embraced platform thinking. Even crowdfunding sites like Kickstarter qualify as platforms.

The Age of the Platform is here. Now, what are you going to do?

In my next post in the series, I’ll be discussing the enormous amounts of data that today’s powerful platforms generate.