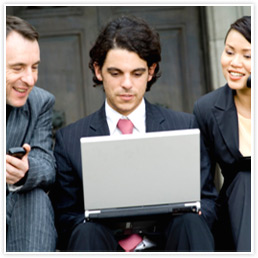 In my last post, I discussed modernizing applications by virtue of embracing cloud computing. Today, I’m going to take a step back and focus less on specific technologies are more on arguably the most important concept of Enterprise 2.0: collaboration.

Consideration 2: Are you suffering from the “Project” mentality?

Going back to mid-1990s, most large organizations procured software very formally through formal RFP processes. Because of the lack of broadband, you couldn’t easily download applications for internal use. IT was also more effective in serving as the gatekeeper.

In Empowered workers: IT should embrace them, John Dodge writes:

That is, there has been a fundamental power shift in many progressive organizations–and even those that are swimming against the stream. Employees can and will use tools “under the radar” when IT refuses to provide useful, sanctioned tools. Web-based applications like Yammer are often adopted in organic and bottom-up fashions, whether or not the CIO likes it or not.

Lamentably, many large organizations are still mired in the late 1990s. They refuse to give employees powerful tools to facilitate meaningful collaboration, of which there are many. Their idea of collaboration for project management (PM)? You guessed it. Good old Microsoft Project, a bulky tool that isn’t on anyone’s list of the best collaborative applications.

I could go in a million directions here. Consider GTDAgenda, a web-based collaboration and PM tool. Then there’s BaseCamp, a similar tool that can be deployed sans proper “installations” and server configurations. Translation: they can be used immediately . More than a few employees of large companies have told me that they have deployed and used tools like these precisely because their own organizations were unwilling or unable to provide them in a timely manner.

Were these employees disobeying their bosses?

Hardly. Their bosses actually approved of it. “Get the job done” trumped “Don’t do it, but blame IT after you miss your deadline.”

No one is advocating anarchy here. Clearly, enterprise risk substantially increases when everyone is doing his or her own thing. By the same token, however, it’s important to realize that substance trumps style. If IT does not meet its end users’ needs, it should be prepared for the consequences. The consumerization of IT means that employees are increasingly tech-savvy, especially younger ones. The organization that ignores this does so at its own peril.

This is post sponsored by the Enterprise CIO Forum and HP.