Dealing with that four-letter word. 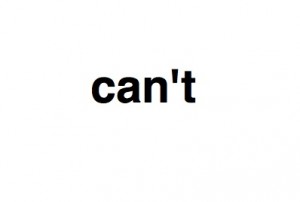 In his excellent book Ripped: How the Wired Generation Revolutionized Music, Greg Kot describes how in the mid-1990s Prince (yes, that one) wanted to release two or three albums per year.

The response from his record company: You can’t do that.

His record company was really saying we can’t do that.

It’s an critical distinction, but that didn’t stop him. Prince did it anyway by starting his own label. Check out his discography.

What does this teach us?

There are two choices when confronted with can’t:

For movers and shakers, there’s really only one real choice.