A few years ago, you could find me tweeting very regularly. A few times my clients even paid me to tweet as part of “TweetChats”: public discussions over important business, tech, and data issues.

These days, you’ll barely find me sharing 280 characters with the world. A quick look at TweetStats confirms what I’ve suspected for months: 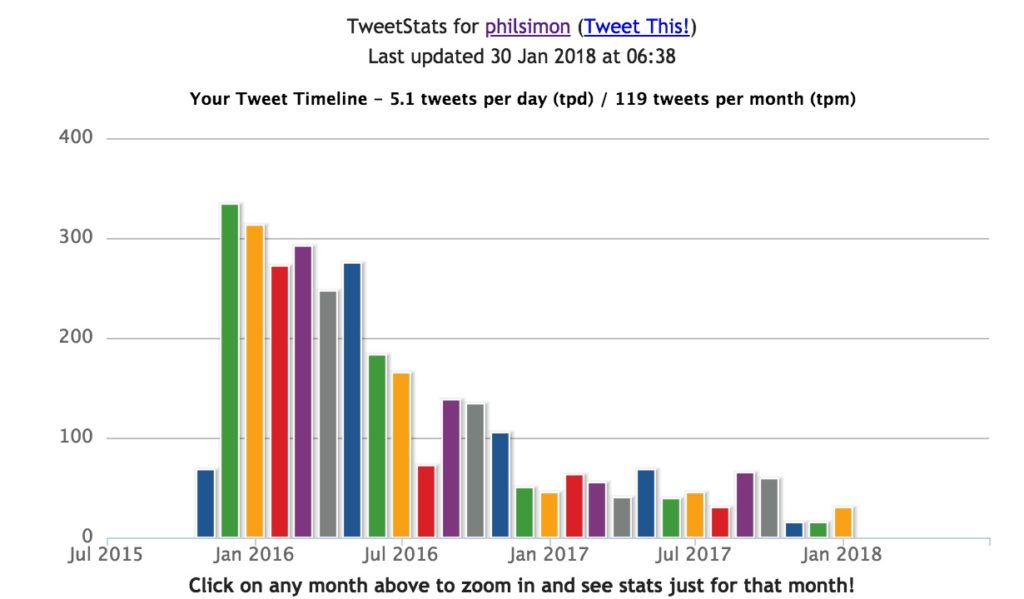 Occasionally I’ll share an interesting article with the world, but I’ve got plenty to do during the academic year. I’d much rather spend time learning new ways to use Slack than tweeting. Even if I had more free time, I doubt that I’d be an active user for other reasons.

Permitting twice as many characters doesn’t mean that Twitter is now the place for intelligent, nuanced, and intelligent discussion. Far from it. With more than 300 million monthly active users (although I’d bet that at least one-third are fake accounts and bots), Twitter promotes filter bubbles and echo chambers. Regardless of your beliefs, it doesn’t take much to find those in your camp and mute/ignore those who disagree with you. This just doesn’t seem that interesting to me.

Using Twitter just isn’t a pleasant experience for me anymore.

It took far too long, but last year Twitter finally allowed users to block content that they found offensive. To be sure, no site or app can filter 100 percent of content that people find offensive, but the company waited far too long to address rampant trolling and intimidation. On the rare times that I’ll access Twitter via Hootsuite, I find myself regularly creating negative keywords to combat trolls.

Brass tacks: Twitter has become an unpleasant experience for me. It’s become a shit show.

Disgust over its leadership

I’d argue that Twitter’s cultural/media value far exceeds its economic value. Flaws aside, it still plays a critical and even outsize role in political discussions. Against that backdrop, you’d think that the company would employ a full-time CEO.

And you’d be wrong.

It’s ridiculous that Jack Dorsey splits his time between Twitter and Square. As I tweeted two years ago:

Twitter: A company with full-time problems and a part-time CEO. #justsayin‘

No doubt this is even more true today.

When a service or app brings me more despair than joy, it’s time to pack it in. I’d bet that Twitter’s management—or at least what’s left of it—realizes the company’s fundamental problems. Maybe that’s why its stock is up amid a new round of takeover rumors.