Announcing My Next Book

My favorite actors, musicians, and writers zig as much as they zag. That is, they don’t just churn out the same idea over and over again. Nothing against bands such as AC/DC, but their albums never really evolved all that much. Rush and Marillion, however, frequently change approaches. That’s how they grow and ultimately become better at their craft. You just can’t typecast them. 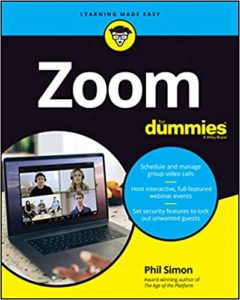 I’ve got no musical chops, but writers can benefit from taking the same tack. I decided while writing Zoom For Dummies that my next book would be more conceptual in nature. In other words, I wouldn’t be detailing the ins and outs how one specific application worked.1 Software vendors often release new features on a daily or weekly basis; keeping up with all of the changes is exhausting and ultimately futile. After all, books eventually need to ship. They reflect snapshots in time.

Effective collaboration means embracing a new mind-set just as much as new applications.

At the core of my next book is the question: How can employees collaborate more effectively?

Yes, effectively navigating the new normal requires the use of new tools. That’s only half of the story, though. True collaboration means embracing a new mind-set as much as new applications. In a way, whether an organization uses Slack, Microsoft Teams, Zoom, Google Chat, or some other newfangled collaboration tool doesn’t matter. The tools’ features are converging—a trend that will only intensify in the future.

Case in point: Slack had long provided private channels while Microsoft Teams did not. Given their utility, you didn’t need to be a soothsayer to predict that Microsoft soon would ape Slack’s valuable functionality and it ultimately did. The fast-follower strategy at its finest.