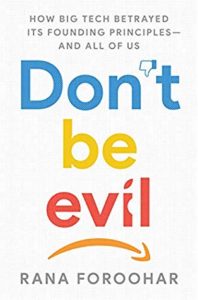 Building upon books such as World Without End and Weapons of Math Destruction, Don’t Be Evil: How Big Tech Betrayed Its Founding Principles — and All of Us makes the case that Big Tech is doing more harm than good. Rana Foroohar proves her central thesis in spades. I find it impossible to argue the opposite these days using any reasonable standard. Her thoughts on venture capital, the bias of algorithms, election interference, and other related topics should gave anyone pause. As she points out, Big Tech’s shiny new things distract us from considerable downsides.

Sure, I’d nitpick with a few of her assertions. For instance, at one point she refers to Uber has profitable when it’s lost billions every quarter. Perhaps this was just an oversight. More generally, I also have difficulty putting Netflix in the same bucket as Amazon, Apple, Facebook, and Google when it comes to power. FAANG might make for a nice acronym but I’d argue that Microsoft exerts far more power than the world’s most valuable streaming company.

A Spot-On Critique of Big Tech

Regardless of my small gripes, this book is spot-on. Foroohar synthesizes the main arguments against the tech titans that have become far too powerful—and I defended them for years. Now more than ever, we need to ask ourselves tough questions about Big Tech’s power. Promises that the industry will regulate itself are as laughable as banks making the same claim prior to the financial crisis. Her final chapter is her strongest and it’s high time to act now with sensible, bi-partisan legislation and oversight.