In Defense of Slack 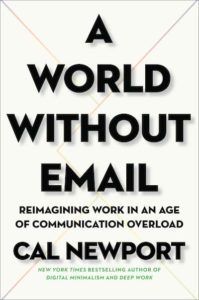 Rock star Cal Newport is back with a new book A World Without Email: Reimagining Work in an Age of Communication Overload. Disclaimer: I’ve read a few reviews, but not his book yet. I do, however, know this: He’s not exactly ambivalent towards Slack and e-mail.

Exhibit A: His recent New Yorker article Slack Is the Right Tool for the Wrong Way to Work. In Newport’s view, they are both scourges that distract us and, by extension, prevent us from doing our best work. From the piece:

We’re simply not wired to monitor an ongoing stream of unpredictable communication at the same time that we’re trying to also finish actual work. E-mail introduced this problem of communication-driven distraction, but Slack pushed it to a new extreme. 

For more of Newport’s thoughts, give his pod with Ezra Klein a listen.

I’ll be the first to admit that, at a high level, new communications tchotchkes can be problematic. Still, it’s evident to me that Newport treats the idea of Slack notifications as a binary. That is, users either get all of them or none of them. To him, there is no middle ground.

A pox on those who think that Slack notifications are binary.

There’s just one flaw with this criticism: Nothing could be further from the truth.

In Chapter 5 of Slack For Dummies, I detail the many easy ways in which Slack users can control which messages and notifications they receive—and, critically, when they receive them. In no particular order, the most powerful arrows in Slack’s anti-distraction quiver include: 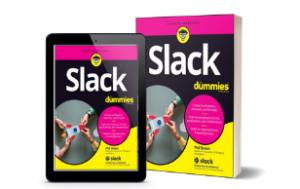 And Slack is hardly the only software vendor to offer bells and whistles that let people focus. Zoom, Microsoft Teams, Google, and other internal collaboration hubs provide similar functionality that allows users to customize their notifications. Brass tacks: These vendors have long realized that, when it comes to alerts, one size doesn’t fit all.

Returning to Newport’s argument, if Slack didn’t ship with these critical features, then he’d have a point. I’d be more inclined to agree with him on the Pavlovian nature of in-app alerts. I could see how constant pings would overwhelm most employees—leaving them no choice but to go off the grid. (Free management tip: If enabling DND mode to focus on your work angers the top brass and colleagues at your company, then it is suffering from a cultural and leadership problem—not a technological one.)

The second and larger problem with Newport’s thesis is that Slack is essentially E-Mail 2.0. In his eyes, the latter is just a souped-up version of the former. As a result, Newport argues that we should use Slack very little—or not at all.

Talk about throwing the baby out with the bathwater.

Again, I’ve encountered this argument many times before. He’s hardly the first person to conflate the two tools.

Yes, you can use both Outlook and Slack to shoot e-mails back and forth, but that’s where the similarities end. (Kind of like saying that both LeBron James and I play basketball.) As my highly scientific chart below shows, sending asynchronous text messages represents just a small fraction of Slack’s robust functionality: 1

Newport is spot-on about the limitations of text-based communication, though. My 2015 book Message Not Received is in part a screed against e-mail. I have proselytized a three-message rule for more than a decade. Sometimes, it’s best for colleagues and partners to talk to each other. As for scheduling, why bother with e-mail? It’s much easier to an online tool like Calendly.

Instead of eschewing Slack, what if people rethought the tools they used to communicate and collaborate?

I’m not just talking about customizing Slack notifications in the ways mentioned above. Those are table stakes. Rather, some organizations are unleashing the true power of Slack as an internal collaboration hub or digital headquarters—a term that Brian Elliott of The Future Forum likes to use.1 These are the ones that have stitched together different third-party apps (spokes) with Slack.

What if people used Slack more intelligently and with some nuance?

As I write in Reimagining Collaboration, employees at these progressive firms can actually minimize multi-tasking. They no longer need to incessantly toggle among different programs—at least to the same extent as they did before. They spend less time searching for documents and messages. Beyond that, they are able to focus while on the clock—a key point that Newport addresses in his prior work Deep Work.2 (As a side note, although there’s no shortage of case studies like this one, it would be fascinating to study the companies that have embraced the Hub-Spoke Model of Collaboration. I’d love to unpack the specific benefits of reimagining collaboration.)

I have been saying this for years: ⁦@SlackHQ⁩ is so much more than a message and email replacement. #ReimaginingCollaboration https://t.co/4DOfwgOIH0

Simon Says: Recognize that all communication and collaboration tools are inherently social.

Let’s take a step back.

What do intra-office memos, e-mail, fax machines, landlines, and in-person drop-ins have in common? Employees can abuse all of them—and Slack is no exception to this rule. Workplace culture and norms matter just as much as the latest shiny new thing, if not more so. More generally, enterprise communication and collaboration tools don’t exist in a vacuum (I’ve had this conversation many times with my muse Terri Griffith. She writes extensively about Thinking in 5T.)

Beyond that, managers would do well to invest in training. Expecting busy employees to independently learn the nuances of a new collaboration hub on their own time is almost always a fool’s errand. They’ll operate under the same misconceptions as Newport does in his new book.

Stop thinking of Slack as E-Mail 2.0. Start taking advantage of the other features of these internal collaboration hubs and their spokes. Trust me: They’re there. They’re powerful. Use them.

Apropos of nothing, I’ve reached out to Cal’s PR folks to have him on my pod.