An Interview With Kevin J. Anderson 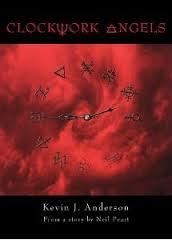 In the dictionary under the word prolific, there ought to be a picture of Kevin J. Anderson. The science fiction author has penned no fewer than 115 books over the past 25 years. His most recent, the much-anticipated Clockwork Angels (a novelization of the recently released and eponymous Rush album) will be released next month along with two other novels.

I recently sat down with Anderson to talk about how Clockwork Angels came about, the publishing industry and how it has changed over the course of his career, and a few other topics. The following is an excerpt of that conversation.

We spoke about how certain types of music inspire your and inform your writing process. Can you elaborate?

I’ve always been inspired by music as I envision and write my stories, and the music of Rush has been a particularly strong influence. Listening to the music, along with innovative or thought-provoking lyrics, was like a catalyst for my imagination, triggering scenes or whole plots. My first novel Resurrection, Inc. (1988, and just reissued) was almost entirely inspired by the Rush album “Grace Under Pressure.” As I was developing the framework of the novel, listening to that album, it seemed as if the songs drove my plotting. Because of that novel (and a nod to the inspiration of Rush in the acknowledgments), I got to know Neil Peart, who writes the lyrics for Rush. We’ve known each other for more than twenty years, interacted in our separate creative fields—his music, my fiction—and we even wrote a short story together. When Neil began to conceive the steampunk fantasy story that eventually became “Clockwork Angels”, he used me as a sounding board for some of his ideas, since he had read some of my earlier fantasy novels that had steampunk elements, Eventually, as the story of the album—as told in snapshots of the music tracks—grew, Neil asked me to work on the novel.

We brainstormed the structure of the story, the characters, the sequence of events, while we spent a day together climbing a 14,000-ft peak in Colorado (because what could be a better place for brainstorming?); the ideas kept flowing even as the oxygen level decreased. Later, as Rush continued on tour and I worked on other deadlines, and Neil kept writing the lyrics for other pieces of the story, we let the story lie fallow for a while, but when he had all the songs written, then I could start working. But the album is more than just words set to music; it wasn’t until I finally heard the rough cuts of the tracks, with Neil’s drums, Geddy Lee’s (Rush’s lead singer) vocals and bass, Alex Lifeson’s guitars, that it all changed from black-and-white Kansas to Technicolor Oz. Then the story was real, and I was able to get to work, writing chapter after chapter as I listened to song after song. I would send the very rough drafts to Neil for his input, and he was like a conductor taking it to a higher level, suggesting changes and additions that tied strands together and pumped up the story.

Music has always been like that to me, fuel for imagination’s rocket, and I can think of many stories, scenes, chapters, whole novels that were inspired by songs.

In Clockwork Angels and some of your books you’ve touched upon a steampunk motif. Can you explain that and why are you attracted to it?

I grew up fascinated by the work of Jules Verne and HG Wells, and I added those ingredients into my fantasies—steam-engine cars, hot-air balloons, clanking automatons, chemistry that worked more like magic than science. I even had a steam-powered atomic bomb in my first fantasy trilogy. Of course, back in 1989 nobody called it “steampunk,” I just thought it was cool. To me, there’s something wondrous about the technological optimism of the subgenre, where science works and quirky inventors can save the world. In recent years, steampunk has become a huge and colorful subculture.

You are primarily a science-fiction writer. Has being associated with one genre helped or hurt your career. Why?

I’ve always written the stories that most attracted me, and in many cases the huge galaxy-spanning canvas gave me enough room to tell the big stories I had in my head. My 7-volume space epic The Saga of Seven Suns is a particularly good example of that, spanning so much distance and so many characters that I don’t think it could be contained in any other genre. However, I’ve also written lots of fantasy, from high-fantasy epics to steampunk and urban fantasy, to horror . . . even humorous horror, with my new Dan Shamble, Zombie PI series that comes out the same week as Clockwork Angels. I think if I only wrote one specific type of novel, I’d be easier to label and the publishers and booksellers might feel more comfortable, but fortunately I have a diverse and dedicated fan base that follows whatever I write.

How has the publishing industry changed over the course of the last 25 years? Is it easier or harder for first-time authors to get their work out and get noticed?

One thing to remember, when looking at the turmoil and rapid change in publishing and bookselling—the closing down of the Borders chain, the rise of eBooks, the domination of amazon—is that while the delivery vehicle for books may be undergoing a lot of upheaval, the stories are still the stories, and the beloved characters are still the characters. People often ask me if I prefer to read an eBook or a “real” book, and my answer is that I prefer to read. Some part of me still loves the tactile sensation of holding a paper book and turning the pages, but I also travel a lot, and I love being able to carry a lightweight eReader in my computer case; and I love to listen to an audiobook when I’m driving or working out in the gym. All of those are simply ways to convey the story to me, and a reader has options now that were never available before. I used to volunteer my time to record some of my stories (at home, with a personal cassette recorder) for the blind & dyslexic, because recorded books were such a rarity. Now virtually all of my titles have been made available in audiobook form; Neil Peart read the novel Clockwork Angels, so his voice delivers the words we created. I myself just recorded my first professional audiobook, a short science fiction novel I wrote last year. There are so many more options available now. So, to answer your specific question, it’s easier for a first-time author to get his or her work out . . . but because so much is out there, it’s even harder to get noticed.

Anderson will be appearing at a number of locations to sign copies of his new books. Click here to see them.