In The Age of the Platform, I detail the very different ways that Apple and Google have approached building their mobile planks. In short, iOS is closed while Android is open–and by open, I mean chaotic. 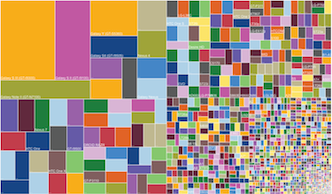 The above visual comes from OpenSignal. (Click on the image to see more interesting numbers on mobile OS usage.1)

Knowing that Android is fragmented and seeing it displayed are two very different things. Brass tacks: it’s simply impossible to standardize Android at this point. That genie is out of the bottle, at least for the foreseeable future. Of course, this begs the inevitable question: Is it better to build a closed or open platform?

Those searching for an easy answer will go wanting. Each method offers different advantages. In other words, there’s no one right way to build a platform. As Ben Evans writes:

Android fragmentation isn’t of itself a bad thing–it’s inherent in the choices that Google made. This is what ‘open’ and ‘choice’ look like. And I doubt if it’s possible to have an ‘un-fragmented’ device landscape that includes both $600 devices and $50 devices: some scattering in capability is part of the deal. If you want to have thousands (literally) of original equipment manufacturers (OEMs), and a huge range of choice and price points, well, you’re going to have different devices with different capabilities.

Without question greater innovation may result from so much openness, although developers understand that their apps may not work on many or most Android devices. Perhaps this explains why, despite Android’s market dominance, most developers opt for an Apple-first approach.

Is an open or closed approach better? It depends on a bevy of factors, many of which are shifting.

Is an open or closed approach better? It depends on many factors, many of which are shifting. Microsoft struggled when many of its customers clung to Windows XP, despite the launches of Vista, 7, and 8. I never count Google out, but Android faces that same problem in spades.

It will be very interesting to see which approach companies like IBM will take in their quests to woo developers and build their own formidable ecosystems. I for one will be watching. As Joshua Brustein recently wrote for BusinessWeek, “Just because you have a platform, it doesn’t mean that everyone who doesn’t is screwed.”