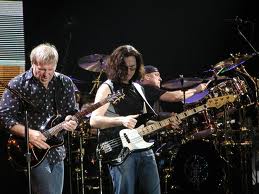 I am not a terribly balanced person. The term “moderation” is a little unfamiliar to me. My friends know this about me and, of course, needle me incessantly about many of my foibles. Don’t worry about me. I can take it.

Perhaps the biggest target on my back over the last twenty or so years has been my unadulterated love of Rush, the Canadian power trio criminally not elected to the Rock and Roll Hall of Fame. (Don’t get me started on this one … I mean, come on, over 30 million albums sold!)

Anyhow, I doubt that many of you would care to read about a post about Rush in and of itself. Fortunately, I can relate the band’s lyrics to many aspects of everyday life–or at least my everyday life. And my life involves IT projects.

Can someone say “segue?”

As much as I love Rush, I’m not silly enough to think that the band’s virtuoso drummer and lyrical genius Neil Peart ever penned even one song directly about project management, GUIs, databases, and organizational change. While Rush has addressed technology in songs such as Virtuality and Digital Man, the band has tended to write about matters more existential, visceral, cerebral, political, and social in nature. Fortunately, Peart’s lyrics are profound enough to allow for multiple interpretations, especially by an obsessive-compulsive Rush fan.

Without further ado, here are my top four Rush lyrics relevant to IT projects.

You can almost feel the current flowing

You can almost see the circuits blowing

We’ve all been here before. Enthusiasm at the beginning of the project gradually erodes from the get-go into either skepticism or outright negativity. The usual suspects include: delays, internal politics, squabbles with vendors and consultants, general infighting, and budget overruns.

By the time that project has reached its anticlimactic denouement, the ultimate result is usually a suboptimal implementation and final product. Stakeholders lament the current state of a project with so much initial promise.

We can walk our road together

If our goals are all the same

We can run alone and free

If we pursue a different aim

Ah, the differing agendas of each faction. The goals of client senior management, IT, business users, consulting firms, and software vendors are often anything but aligned. Many have written before about Agency Theory and the tendency of each party (and person) to work in its own self-interest. Perhaps this is best exemplified in the popular book Freakonomics.  The simple point is that everyone rowing in the same direction tends to produce a smoother and overall better project. For many reasons, however, this is rarely the case.

Rush’s signature song continues to evoke powerful images through its nebulous lyrics. The challenge with all things technology is that nothing is static. Business needs change frequently these days, forcing organizations to evaluate whether their current technologies have become outdated. The term “legacy system” does not merely refer to a quarter century mainframe clunker stored in a dark IT closet, spitting out punch cards and emitting weird noises throughout the night. Even “it company” Twitter had to blow away its initial IT infrastructure after its management realized that its popularity had quickly exceeded the capabilities of Ruby on Rails.

Well, you can stake that claim

Good work is the key to good fortune

If they don’t take that game

And sometimes the winner takes nothing

We draw our own designs

But fortune has to make that frame

Let’s be honest here. The best project manager, CIO, or consultant cannot possibly predict with any degree of certainly all of the forthcoming challenges of a major IT endeavor, much less the time required to resolve them. Sometimes an innocuous question results in the discovery—and resolution—of a problem that would have otherwise gone unrecognized. Yes, hard work matters. Project plans, testing, and the like are all important. However, try as we might to be all scientific about things, luck is huge. It ain’t all skill.

I’m sure that I’m missing some lyrics. Rush fans of the world unite! What other lyrics apply to the IT world?

Three Challenges That I’ve Faced as a Writer

Being a professional scribe isn’t all puppy dogs and ice cream.