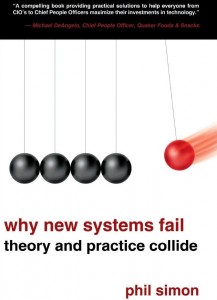 On February 4, 2009, I released Why New Systems Fail. My first foray into long-form publishing started with a whimper, not a bang. For five long months, very little happened around the book despite my promotional efforts and those of my pricey PR firm at the time.

To be fair, a book recommending ways to avoid failures on new system implementations from a relatively unknown independent consultant couldn’t have come at a worse time. It’s not like I had established myself as a reputable author in years past. What’s more, the US was in the midst of its worst economic climate since the Great Depression. IT budgets were shrinking, not expanding.

Brass tacks: I learned the hard way that, for oodles of reasons, selling books is exceptionally difficult.1 Put differently, writing is easy. Marketing is hard.

Still, I kept at it. I’m stubborn. 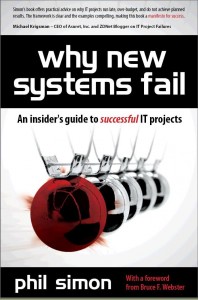 Finally, things picked up on July 15, 2009. A copy of my book had found its way to Bruce Webster. He was a fan. His subsequent review on the über-popular site Slashdot catapulted Why New Systems Fail to number ninety-freaking-one on the Amazon bestseller list. Not #91 for technology books. I mean #91—as in of all books sold on Amazon at that point.2 More than 600 people bought it that week—far more than all sales from the previous five months combined.

That didn’t suck. I often joke, though, that this was akin to Ten—Pearl Jam’s first album. I had nowhere to go but down.

In the time since, I penned an updated version of Why New Systems Fail3 as well as seven other texts. Those books have opened up many opportunities for me—most of which I did not see coming. Some of my income is even passive.

Despite many advances and changes, ERP failure is alive and well.

New entrants in enterprise software typically rely upon cloud computing and its cousin SaaS.4 Unlike 2009, it’s no longer weird to suggest an off-premise computing solution.

On a personal level, I like to think that I am a far better writer than I was a decade ago. The first edition of Why New Systems Fail certainly wasn’t awful, but that book would flow much better if I sat down to write it today. If I’ve learned anything over the last decade, it is that writing is very much a skill; one must hone it to improve. This involves looking both inward and outward. With regard to the latter, the scribes behind 538, Without Bullshit, and No Mercy / No Malice have profoundly affected how I tackle the craft of writing.

Despite many technological advances and new alternatives, ERP failure is alive and well. I’ve had many conversations with folks since the book’s publication about problems plaguing organizations as they attempt to adopt new technologies. Sure, occasionally the issues are technical in nature. More often than not, though, they’re people-related. I suspect that this won’t change anytime soon.

As for book sales, I can say this much: They’ve become easier over time but they are certainly not easy. Foolish is the soul who believes otherwise. The publishing landscape is more crowded than ever. Building a strong personal brand has helped, but make no mistake: there’s no easy way to move a bunch of books. It seems to resemble the world of startups. You learn a little more each time but success is anything but guaranteed.

I doubt that I’ll continue to churn out books at such a rapid pace over the next decade. I’m not lacking for ideas but teaching, speaking, and consulting take up a decent chunk of my professional time and energy.

Here’s to the next ten years of writing.