Nailing Your Book’s Title and Subtitle Is Really Hard—and Essential.

At some point when I coach first-time and even experienced authors, the topic turns to their book’s title and subtitle. It’s a matter of when, not if. Often authors suspect that these key words will just magically fall into place.

It’s not an unreasonable belief. After all, some of them have already written meaty manuscripts and detailed outlines. How hard can it be to pick a few of them?

While kismet can happen, it tends to be the exception that proves the rule. In my experience, it’s far easier to write a chapter or even an entire section than to scribe the critical ten or so words that do each of the following:

Yes, the combination of a good book title and subtitle accomplishes these lofty objectives. Todd Sattersten of Bard Press calls this combination of elements the throughline.

In this post, I’ll explain the process by which I arrived at the title and subtitle for my new book. It was neither simple nor easy.

By way of background, for this one, I had to invoke my contingency plan. As a result, the previous cover, title, and subtitle went by the wayside.

After dozens of iterations and plenty of conversations with friends, I had finally landed on Reimagining Collaboration—a short and evocative title. By itself, however, those two words are incomplete and devoid of context:

To be fair, though, just about all business book titles make little sense absent their subtitles as a general rule. The Long Tail? Huh? The Long Tail: Why the Future of Business is Selling Less of More? Oh, now I get it.

Exceptions to this rule include classic texts such as How to Win Friends and Influence People and business-related For Dummies guides. (Yeah, I got off easy on titling my previous two books, but I digress.)

Weighing the Risks of an SEO-Friendly Subtitle

At a high level, Reimagining Collaboration focuses on the unrealized power of internal collaboration hubs. I’m talking about Slack, Microsoft Teams, Zoom, and others. Putting the names of these three tools in the subtitle increases the odds that buyers will stumble upon it. For example, perhaps a CEO thinks that employees at her firm are using Teams as E-Mail 2.0 when it can do much more. (She’s right.) As a result, she starts looking for a solution in the form of a book. (More on that later.)

Think of a title and subtitle as complements.

At the same time, though, this move entails a good deal of risk. Flashback to 2014. You are considering buying a social-media book with Myspace in its subtitle like this one. I’ll bet that you passed on it and opted for one that didn’t feel as dated. Brass tacks: Rare is the software application or vendor with extended staying power. Want to bet that people will be still buying books on Clubhouse in two years—especially when its numbers are already declining?

In fact, as Reimagining Collaboration was going to print, Salesforce acquired Slack for nearly $28 billion. (Salesforce is wisely keeping the Slack brand, just as it did when it gobbled up Tableau.) Here’s another complicating factor: Product names change. Google recently rebranded G Suite as Google Workspace. (At least I hadn’t put Google’s G Suite in the book’s subtitle.)

As of early November of last year, the complete name of my book was Reimagining Collaboration: Slack, Microsoft Teams, Zoom, and the New World of Work. Here’s that version of the cover: 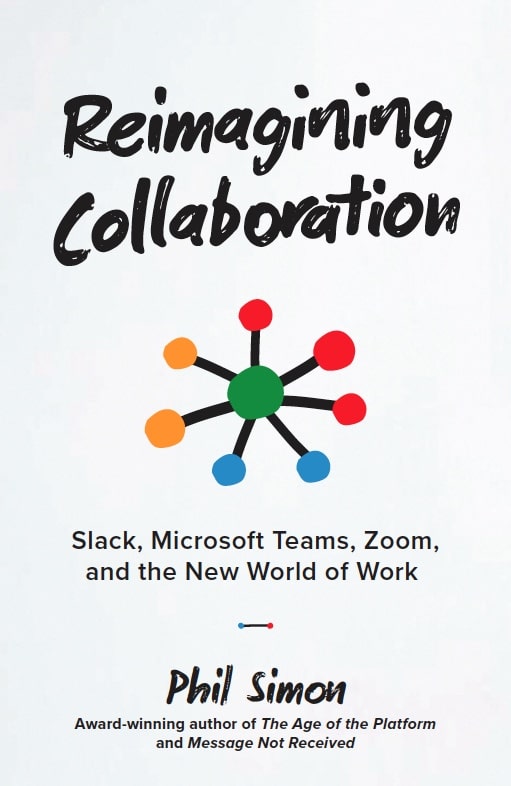 Listing today’s most popular collaboration tools in the subtitle only got me halfway home, though. I hadn’t quite nailed it—and I innately knew it. I needed to properly mark this book in time without using a verbose subtitle.

One Last Small but Critical Tweak

Think about it. People have been writing books about the future of work for decades. Here is one from 1992, but that year is arbitrary. What about 1997? Back then, the Web was starting to explode. Ditto in 2007 when the iPhone arrived—followed shortly with Android-based smartphones. Didn’t those events portend massive changes in the mechanics of work? What made my effort about the future of work different from the hundreds of others already out—with scores of others on the way?

Even a single word replacement can yield massive benefits.

Along these lines and after much wordsmithing, I swapped out the New World of Work with the Post-COVID World of Work. This minor change did two essential things.

First, it clearly indicated to prospective buyers that I wrote this book after the pandemic began—although the very tools in the subtitle suggest as much.1 Second and just as important, it accentuates the fact that many if not most knowledge workers will not return to their pre-COVID work routines. (This New York Times piece details what Google is doing to prepare as its employees return to the office. TL;DR: The changes are significant.) 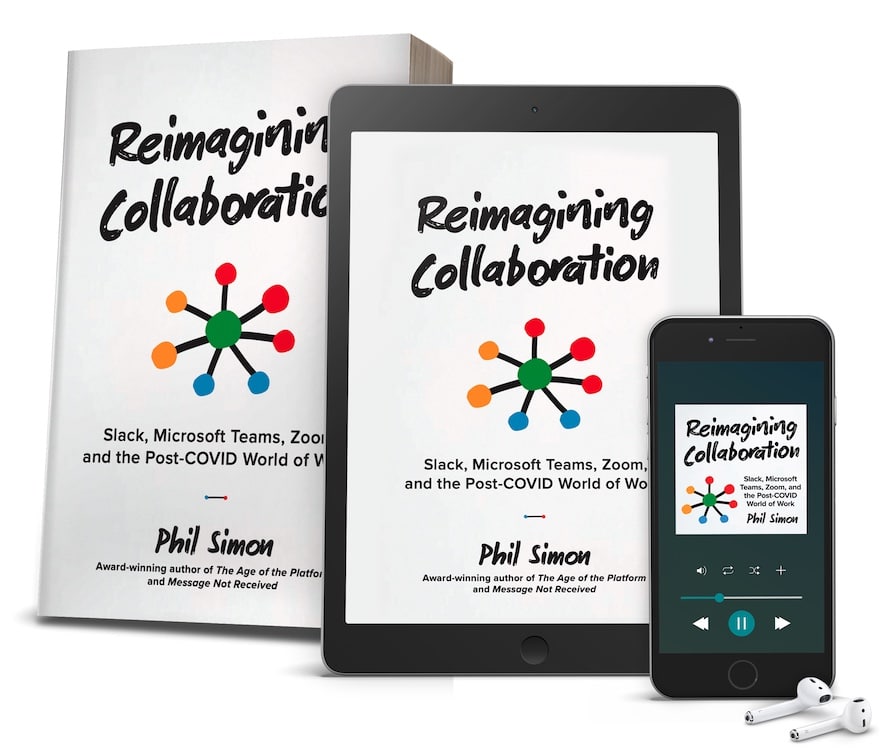 If all of this obsessing over adjectives, verbs, nouns, and word orders seems like a great deal of effort, trust your instincts.2 When launching a book, you only get one bite at the apple, at least until a second edition arrives. Beyond that, last week provided several reminders of why spending all of this time and effort is so valuable.

First, I signed up a new client for an upcoming webinar. When I asked him how he had found me, he said that he had searched Amazon for post-COVID books about collaboration. Based on my book’s gestalt, he was intrigued and contacted me. (I’m talking about its cover, title, subtitle, book description, endorsements, and reviews.) He’s also purchasing 100 copies. Second, entrepreneur.com listed Reimagining Collaboration as one of 10 New Books for Leading in a Hybrid Work Environment.

I know that the book is resonating with potential readers and finding its audience. A recent and thoughtful Amazon reviewer underscored the benefits that a descriptive, eye-catching, and SEO-friendly title and subtitle that fastidious authors strive to attain:

Take away the words in my subtitle, and it’s likely that Fred doesn’t find my book at all, much less buy it, read it, and review it. If a tree falls in a forest …

Simon Says: Intelligently titling your book can pay off in spades.

The naming process can be time-consuming and downright frustrating, even for repeat authors. Fight through it. The juice is worth the squeeze.

For more advice like this, check out my Teachable course How to Write a Business Book.