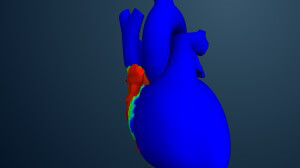 Do you whip out a map while you’re driving these days? At work, do you send letters or intraoffice memos like Don Draper does? Do you still own a fax machine?

Thanks to technology, just about every industry has dramatically changed in the last twenty years—with one glaring omission: healthcare.

Go to a doctor’s office and it usually feels like 1995 or even 1975. Healthcare remains plagued by tens of billions of dollars of annual waste, fraud, inefficiency, and general bureaucracy.

Maybe none of this would matter if it wasn’t so large. In the US alone, healthcare accounts for nearly $4 trillion of the country’s GDP. What’s more, that number is increasing at a rate of six to seven percent per annum, considerably higher than inflation.

There’s no simple solution to the mess that is healthcare. As I pointed out on CNBC last year, however, data and technology can go a long way towards making healthcare work better. For instance, technologies like computational modeling look particularly promising. Imagine doctors being able to simulate what each patient’s heart looks like before cutting him or her open. Who can argue with safer, less expensive, and superior healthcare? Regardless of your politics or feelings about Obamacare, advancements like these offer enormous hope.

Along these lines, Dassault Systèmes recently signed a five-year collaborative research agreement with the Food and Drug Administration (FDA). The pact calls for the treatment of heart disease via the insertion, placement, and performance of pacemaker leads and other cardiovascular devices.

Dassault Systèmes isn’t going about such an endeavor on its own, though. The company is working closely with the Medical Device Innovation Consortium (MDIC) to accelerate the approval process of medical devices. Dubbed the Living Heart Project, Dassault has plenty of help in the form of leading cardiologists, medical device companies, and academic researchers.

The 30 contributing member organizations include more than 100 cardiovascular specialists from across research, industry, and medicine. DSS is proving each party with access to its heart simulator.

Anyone with a modicum of knowledge about healthcare knows that historically large healthcare organizations haven’t always played nice with each other. Collaboration among pharmaceutical companies isn’t exactly common. What’s more, scientists have often valuable withheld information from each other. Some have even bickered about who discovered diseases, often to the detriment of those affected. AIDS is a case in point. (See the excellent 1993 movie And the Band Played On.) Getting disparate parties and warring factions to work together is almost always far easier said than done.

To avoid these thorny issues, Dassault is employing a crowdsourcing model that both protects individual intellectual property and lets them reap potential benefits. Other goals include spurring innovation, improving patient reliability, and reducing costs. Interestingly, the project has already borne fruit. For instance, it validated the efficacy of a novel valve assist device prior to insertion in a real patient and understand the progression of heart disease.

Let’s hope that collaboration and innovation like this increasingly become the rule in healthcare, not the exception.