Uber, AirBNB, and the Adjacent Possible

Back in 2009, Garrett Camp and Travis Kalanick founded what was then a little ride-hailing company called Uber. Odds are, though, that you’ve only heard of it only relatively recently. The company that bills itself as “everyone’s private driver” to date has raised a mind-boggling $15 billion.

As shown below, the vast majority of that sum has come in the last two years. (Ditto for the controversies surrounding the company, but that’s a post for another day.) 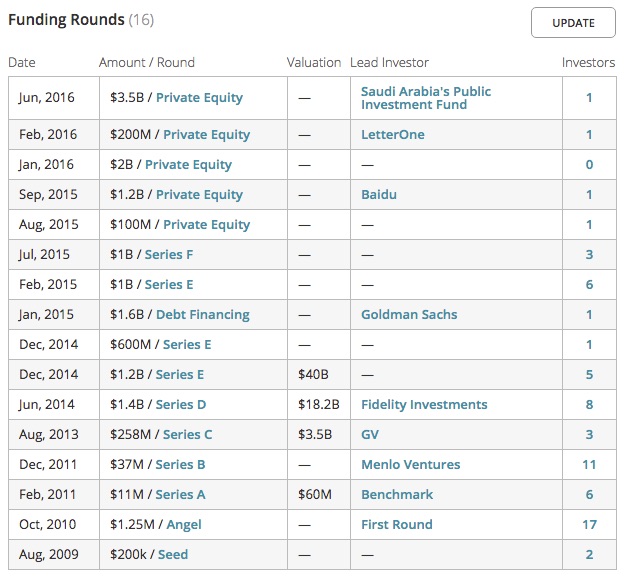 It turns out, though, that the idea of Uber isn’t so new after all. In fact, as Ezra Klein points out on Vox, venture capitalists had heard the idea for Uber way back in 2005. From the piece:

“Chris Dixon, a venture capitalist at Andreessen Horowitz, has a useful framework for thinking about this argument. ‘In 2005, a bunch of companies pitched me the idea for Uber,’ he says. ‘But because they followed orthodox thinking, they figured they would build the software but let other people manage the cars. ”

This begs the question: In an age of rapid disruption and change, why did it take mass ride sharing—and Uber in particular—so long to jump from theory to practice?

Explaining the Rise of Uber and its Ilk

The short and general answer is that Uber back in 2005 only existed in what Steven Johnson calls the adjacent possible. For instance, the great Charles Babbage essentially conceived of the modern-day computer nearly 150 years ago, long before the technology existed to build it.

The longer, more nuanced answer is that the rise of cloud computing, smartphones, Big Data and apps made Uber possible. If you’re Camp, Kalanick, or an early Uber investor, you couldn’t be more pleased. However, if you work for a conventional taxi company, you most certainly find Uber, Lyft, and their ilk very disruptive—and you should. Aside from Uber’s myriad legislative battles and even fines, some driver protests have turned violent.

If Uber’s keeping you up at nights, at least you’re not alone in your consternation. Traditional hotel chains aren’t too fond of AirBNB, a company with both similarly outsize ambitions and a questionable record with respect to abiding by current housing statutes. And don’t get me started on the company’s misplaced PR efforts.

I could go on but you get my point: never before has disruption come so quickly and from such unpredictable sources. Case in point: Who would have thought even three years ago that an iconic search engine would be building driverless cars?

Clamor all you want for the now-quaint days of the 1980s, but rapid disruption is here to stay. Sure, there are downsides, but make no mistake: these same powerful technologies that have upended major industries concurrently provide enormous opportunity. (For more on this, see the IBM report “Analytics: The upside of disruption.”)