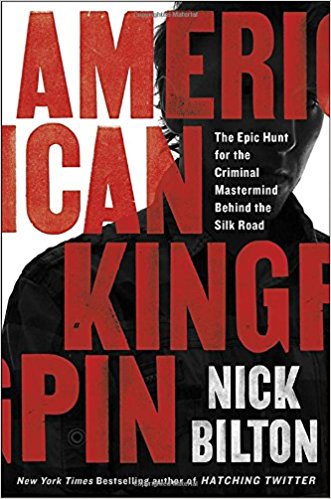 As Dr. Melvin Kranzberg once famously said, “Technology is neither good nor bad; nor is it neutral.”

Curious about what goes on and how the feds took down one of the largest pirate web sites, I recently read American Kingpin: The Epic Hunt for the Criminal Mastermind Behind the Silk Road (affliate link). In short, the book is amazing and I plowed through it in under a day.

I recently had a chance to sit down with the book’s author, Nick Bilton.

Note that his publisher sent me an advanced copy of the gratis.

Here is our interview.

PS: Congratulations on penning such an excellent and compelling text. I barely know where to begin. Let’s start with background. How much of the story of Silk Road did you know before you decided to write the book?

NB: I actually lived a few blocks away from the library where Ross Ulbricht was arrested in this sleepy part of San Francisco called Glen Park. I was working for The New York Times at the time and was fascinated by the modern day reality that someone could be running the biggest drug and guns empire on the Internet from a tiny library (and nearby coffee shops). In the end, as the story unfurled, I felt it was such a perfect allegory for how technology can be used for both good, and for evil, and how people in Silicon Valley build these sites with one goal in mind, but are incapable of seeing how it will affect so many people.

PS: I found the different agents’ ability to connect the dots fascinating. Even those with in-depth knowledge of security can leave key breadcrumbs.

NB: Yes, it’s truly fascinating how many little details and fingerprints we leave through our digital devices every single day. I had a number of moments during the reporting of the book where I would find clues Ross Ulbricht left behind that opened a floodgate to stories of where he had been, and who with. From a journalism standpoint, technology has enabled an entirely new style of research and storytelling, where it’s possible to write narrative non-fiction with a slew of details (like what someone was wearing from a Facebook photo, or where they were located from the GPS data on their phone, among many other details) that in the past would have been impossible to discern.

PS: I don’t know much about the extent to which different government agencies conflict with each other. Is this level of dysfunction common or is it only prevalent on high-profile cases?

NB: Well it’s usually only high-profile cases that bring several different government agencies together in the hunt for a suspect. And naturally, the bigger the case, the more people and agencies get involved, and the more the investigation is slowed down. It’s interesting when people think there are these big government conspiracies at play all the time, but when you actually see how dysfunctional the government can be (in all kinds of cases) you realize how difficult that would be.

PS: What’s your opinion on Ross Ulbricht? Was his sentence just in your view?

NB: After reading Ross’s writings about legalizing drugs, I could completely understand his arguments, and you can see why he believed legalizing drugs would make society safer. But when you see what actually happened with the Silk Road, you can comprehend why the judge chose to hand down such a harsh sentence. There were teenagers and college students who died from bad drugs or overdoses. Guns and other weapons were sold without any thought for who was buying them. And when you see the results of the opioid epidemic in America, that is another layer of what can happen with sites like the Silk Road. The site connected buyers and sellers with the simplicity that Uber has connected drivers and riders. The ability to buy drugs from overseas meant that people could now buy lab-made heroin, called fentanyl, which is 50 to 100 times stronger than traditional heroin. And as several agents in the Federal government explained to me, the ease with which these drugs can now be purchased from places like China, have definitively helped lead to the rise of opioid deaths in America. While we all may not agree with the judge’s statement during Ross statement, I find it hard to disagree with her statement to him: “What is clear is that people are very, very complex and you are one of them. There is good in you, Mr. Ulbricht, I have no doubt, but there is also bad, and what you did in connection with Silk Road was terribly destructive to our social fabric.”

PS: Considering what he did, Carl Force seems to have gotten off light? Thoughts?

NB: I think he got a lighter sentence because he pled guilty and turned himself in. If he would have gone a different route, fighting the case and then losing, he probably would’ve ended up with a sentence five to ten times as severe. It’s interesting that the sentencing aspect of the story has become one of the focal points of the aftermath of the Silk Road. Some people see Carl as getting off light and Ross as being handed too high of a sentence; others see it the other way around. What everyone can agree on is that the sentencing guidelines in America don’t make a lot of sense and should really be rethought for today’s crimes.