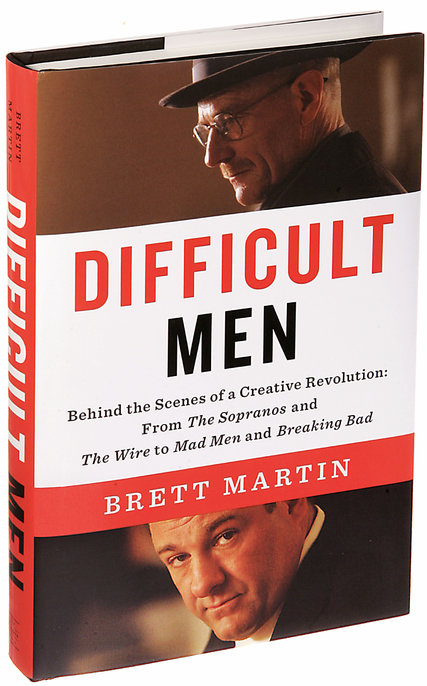 While working on my own books, I have to be careful about my own reading. I usually take a break from pleasure reading when scribing a new text. As readers of this blog know, I’m a huge fan of Breaking Bad, The Sopranos, and other long-form dramas about morally complicated characters.

Against that backdrop, I couldn’t wait to get my hands on Difficult Men: Behind the Scenes of a Creative Revolution: From The Sopranos and The Wire to Mad Men and Breaking Bad (affiliate link) by New Yorker writer Brett Martin. I pre-ordered it months ago and yesterday the book arrived.

Difficult Men is well written and researched and I did enjoy it. Roughly 50 pages in, though, something began gnawing at me. Difficult Men feels like two separate books fused into one, and the result is ultimately unsatisfying.

I’d wager that nearly 70 percent of the book is about The Sopranos, clearly the show that spawned what Martin calls “the creative revolution.” No argument here. Matthew Weiner of Mad Men sports a Sopranos‘ lineage. And Vince Gilligan has said that there would be no Walter White without Tony Soprano. Additional kudos go to David Simon’s The Wire, also a groundbreaking show. Unfortunately, however, Martin gives culturally significant series like Six Feet Under, Breaking Bad, and others short shrift.

This is mostly a book about The Sopranos and the impact it has had.

For some reason, Martin keeps bringing everything back to The Sopranos, and often its creator David Chase. Difficult Men spends far too much time on the show that spawned the Creative Revolution and not enough on the other shows of that revolution. Yes, The Sopranos was important. We get it. As I read the book I kept asking myself, Why not just write a book about The Sopranos and another, more balanced one on what Martin calls The Third Golden Age of Television? Maybe the publisher recommended that Martin add popular shows to the subtitle of the book for SEO purposes?

A few pet peeves: I lost count of the number of times that the author dropped words like auteur and tropes. Some of that seemed a bit gratuitous. And why Bryan Cranston is on the cover of this book is beyond me. This is mostly a book about The Sopranos and the impact it has had.

Don’t Be Evil by Rana Foroohar
The Years That Matter Most
Summer Reading
The Five Best Books I Read in 2018
Disrupted: My Misadventure in the Start-Up Bubble