A personal and decidedly unscientific analysis. 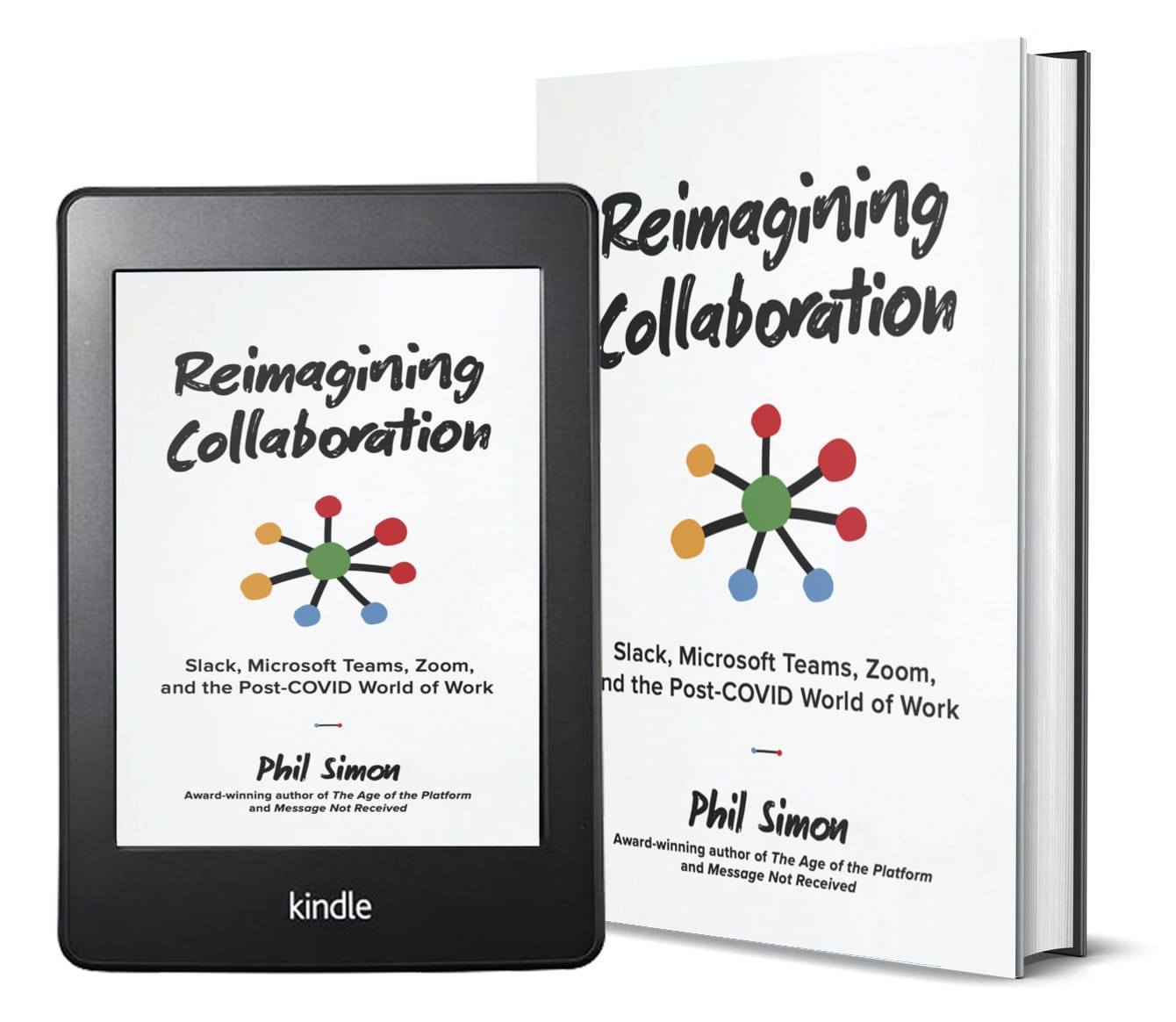 One of the key tenets of Reimagining Collaboration is that the use of internal collaboration hubs correlates with better outcomes. That is, all things being equal, projects in which participants routinely use Microsoft Teams, Slack, Zoom, and Google Workspace will yield superior results than their email-based counterparts.

Since the book’s publication earlier this year, both Microsoft and Slack’s Future Forum have released interesting research on the future of work. Among their findings, internal collaboration hubs will play critical roles as organizations build digital headquarters and manage hybrid workforces.1

I like to think that my books connect dots that others miss. Analysis and synthesis are powerful arrows in the quiver for non-fiction writers. Yep, I do my homework in the form of reviewing existing academic and industry research. Although my books contain original case studies, I simply don’t possess the access, data, and resources required to do anything remotely resembling an industry-wide analysis all by my lonesome. My focus is on original ideas and qualitative research, not quantitative research. Gartner or Forrester I am not.

That doesn’t mean, however, that I my books represent the sole outlet for my contributions, thinking, and analysis.

Specifically, I was curious about two things:

In this post, I go down the rabbit hole and answer a modest question: In my little universe, does others’ use of new collaboration tools ultimately correlate with better project outcomes?

I began by exporting the last two years of data from my accounting application. Two years seemed reasonable given the recent rise of new collaborative tools. If a project didn’t go well in 2012, it’s hard to cite a stubborn resistance to using Slack because, you know, it didn’t exist yet.2

I then ranked my interactions with partners and clients across these two dimensions: outcomes and the use of new collaboration tools. I placed outcomes into three simple buckets:

To minimize the chance of pesky survivorship bias, I included prospects and potential partners. I kept them in my dataset even if we ultimately didn’t wind up walking down the aisle together.

Now, on to the second dimension. I ranked others’ use of new collaboration tools as follows:

Based on my analysis, I created five interactive data visualizations in Tableau:

View the dataviz on Tableau Public.

First and as expected, the use of collaborative tools correlates positively with successful outcomes. (See the red circles in first dataviz.) Only once did an engagement go well when the individuals demanded that our interactions take place exclusively via email. Conversely, when we used proper collaboration hubs, the outcome was unsuccessful exactly zero times. 💥

I’ll cop to playing a major role here. I nudge people in my orbit to embrace these hubs—sometimes not all that subtly either. I’m usually able to read the room and, on occasion, dial things down when necessary. At the same time, though, I won’t pretend that Slack and its ilk don’t exist. Without question, my hub-oriented mind-set affects the outcomes.

Second, the opposite holds true: I look back on recent projects that went well and, almost without exception, most of our communications took place in Zoom, Slack, or Microsoft Teams. Google Docs, Asana, Canva, and Docusign also make regular appearances. Put bluntly, we all realize that email is not a Swiss Army Knife.

Case in point: A new webinar client. In total, over the past three weeks, I have received a grand total of two emails from company personnel:

Next and as you can see on the fourth tab, real and prospective partners scored about 20 percent higher on the outcome scale. Finally, when it comes to the use of collaborative tools, my clients scored almost as well my partners did. I’m still processing both of these findings.

At the risk of stating the obvious, my analysis wouldn’t withstand peer review for a bevy of reasons. (Cue Dirty Harry quote.) Although instructive, it suffers from a number of limitations.

It doesn’t take a rocket surgeon to see the elephant in the room: selection bias. Specifically, I get to choose the people with whom I work. Should prospective partners vehemently oppose adopting new tools, then I can cut bait. As an aside, it would be interesting to see what happens at large consulting firms. As I know from personal experience, rarely do you get to choose your projects.4

I’m the one doing the categorizing. That is, I alone decided if an outcome was moderately or highly successful. I cannot claim to be entirely objective. #self-awareness

I’m measuring outcomes, not effort. It’s not a trivial distinction. In a few instances, the gigs turned out well, but individuals’ refusal to use collaboration tools made things more difficult. I can think of a few instances in which a five-minute Zoom call would have obviated six emails. Ditto for sharing a Google Doc vs. emailing attachments back and forth.

It’s not like I decided to run an experiment on my clients and partners. Some people on the list have worked with me for years in different capacities.

Are projects successful because people use collaboration hubs? Or does the arrow go in the either direction? Oh, and I can’t rule out any confounding variables.

The answer to the question that I posed at the start of this post is yes. Despite the limitations of my analysis, the use of new collaboration tools correlates with successful outcomes.

A Better Way to Work
On the Parallels Between Collaboration Hubs and Smartphones
On Collaboration, Seinfeld, and Chinese Food
In Which I Stitch Together Booleans, Books, and Influence
Nailing Your Book’s Title and Subtitle Is Really Hard—and Essential.