The Battle for Jersey: Simon vs. Snooki 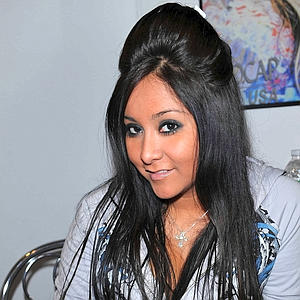 Living in New Jersey, I take a great deal of heat. When asked about the town in which I live, most people just say, “What exit?” Traffic can be a bear and don’t even get me started about the outrageous property taxes. NJ is rife with stereotypes (including the late George Carlin’s label “The Toll Booth State”). If I’m honest, some of them are deserved.

I get it. Shows like The Sopranos offer a portrayal of the state that can only be described as less than flattering. While clearly glorifying violence and the mob, few critics and viewers of quality TV can dispute that it’s a very well made show.

On the other end of the spectrum, there’s Jersey Shore, the awful and ridiculously popular reality show on MTV that has even embarrassed the state’s governor. Now, I can only cop to having watched about three minutes of this tripe–and maybe I’m missing something. Maybe there’s some clever social commentary lost on me. Maybe.

As someone who actually walks into book stores, I knew that this was coming. One of the show’s stars, Snooki (real name: Nicole Polizzi) has a new book out. And, in what may well be a sign of the apocalypse or at least a stunning indictment of our society, the book is a best seller. I know that tastes vary. But this is just wrong.

On behalf of every writer whose work is under-appreciated by the masses, I’d like you to consider buying or recommend my latest book, The New Small. I have one goal today:

I want my book to be ranked higher than Snooki’s on Amazon.com.

That’s it. Just one day.

Is this a tall order? Maybe, but I am picking this day for a reason. Canada’s national newspaper, The Globe and Mail, is running a 1,500 word excerpt of my book today. That alone should be enough to beat Snooki today. Still, I don’t want to take any chances.

In Miller’s Crossing, one of my ten favorite flicks, Gabriel Byrne’s Tom Reagan says, “I don’t ask much and I don’t ask often.” Well put. Please, for all that is sacred, help me overtake Snooki’s book for one day.

I’ll be posting daily updates as comments to this post in advance. Thank you in advance. You are serving humanity here. I promise.

Tale of the Tape