What are the odds that the Warriors go 4 of 30 again?

Without question, the Golden State Warriors are the talk of the NBA this year. The team is on pace to eclipse the Chicago Bulls’ 72-10 record in 1995-96. Yet, the lowly Lakers beat the Warriors on March 6 in one of the greatest regular-season upsets in NBA history.

Watching the game, I couldn’t believe how poorly the Warriors shot from behind the arc. (The team made only four of 30 attempts.) The Warriors’ shot chart in on the left, courtesy of ESPN:

As you can see from the chart below, this was by far Golden State’s worst TPA performance this year: 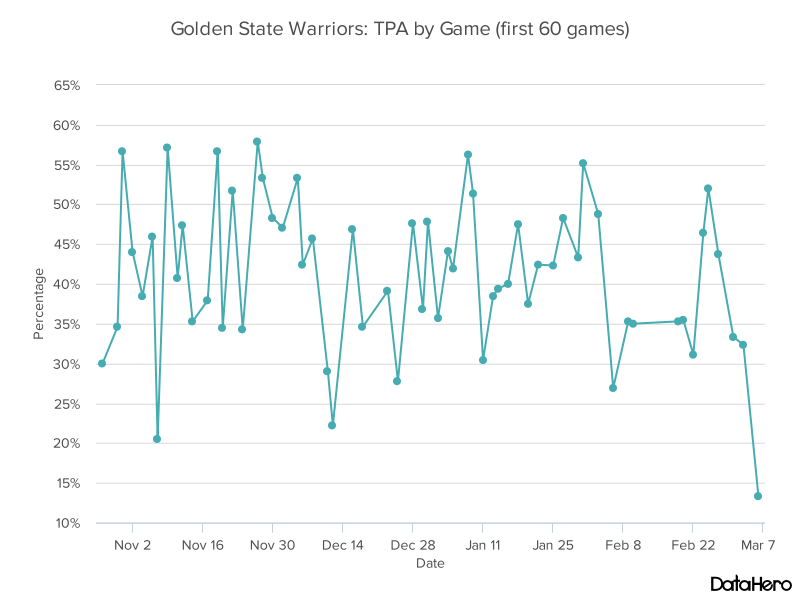 The Warriors’ three-point shooting on March 6 was the very definition of the term anomaly.

In case you’re wondering, it’s not hard to find this information. I grabbed individual game data from basketball-reference.com and then simplified the dataset a bit. (Download it here.)

As you can see from the chart above, the team’s three-point percentage against the Lakers on March 6 was by far its worst of the year. But, given its three-point proficiency this year, what were the odds that the Warriors would make so few shots on so many attempts?

A few disclaimers are in order here. First, for the sake of simplicity, I’ll assume that all TPAs are independent probabilities like coin flips. That is, I won’t get into the hot-hand fallacy here. Second, I’ll ignore any defensive strategies or adjustments by Lakers’ coach Byron Scott. It’s not hard to devise a scheme that effectively makes it difficult for the Warriors to shoot effective TPAs. In the extreme, Scott could have had all five Lakers guard the three-point line and willfully conceded layups and other easy two-point shots.

To answer my question, I used a statistics tool that I learned in college: the binomial distribution. It’s perfect for roulette and coin flips. For instance, to determine the odds of three heads in ten coin flips:

What are the odds that the Warriors go 4 of 30 again?

Fortunately, with the data, it’s easy to figure these things out. I used an Excel function.

In other words, even with the limitations stated above, the Warriors’ three-point shooting on March 6 was the very definition of the term anomaly. It’s extremely unlikely that we’ll see anything close to those numbers from Steph Curry and company this year. In fact, in the Warriors’ next game on March 7 against Orlando, the team hit 16 of 35 TPAs (45.7%), a number much more in keeping with its performance this year.

In case you’re wondering, by this rationale, the odds that the Warriors miss 30 consecutive threes are one in roughly 10.7 million. With a 42 percent success rate: