Who will run your organization’s IoT efforts?

For decades now, CIOs have argued with their brethren about whether IT should “own” enterprise data. For many years now, the IT-Business Divide has served as a major bone of contention in most large, mature organizations, something that I’ve seen firsthand in my consulting days. Given the extent of these testy historical arguments, it’s fair to ask two questions with respect to future organizations Internet of Things‘ (IoT) efforts:

Let’s address the normative question first. On more than a few occasions in my career, I’ve seen both sides of the IT-Business Divide play out. (Consultants are often placed in the middle of thorny situations.) I’ve seen project managers excoriate CIOs and their minions over data-quality issues from prior centuries. This was the very definition of killing the messenger.

I certainly could appreciate each side’s perspective, but I’ve never believed that IT should assume responsibility for business data. The reason is simple: IT employees rarely if ever create data issues. Rather the HR or AP clerk did by fat-fingering a form or invoice or carelessly running an update or purge program. IT was merely presenting the data as it was currently stored in a database. What’s more, IT could never provide “the answer” to a business-related problem.

Nothing that I’ve learned about the IoT makes me view it any differently. HR should be responsible for HR data. Ditto for sales, marketing, finance, and the like.

IT’s Role in the IoT

Now let’s address the second query. While we’re still in the early innings of the (IoT), it’s looking like the answer to the second query will be no. That is, they are not “assigning” the IoT to their IT departments.

As Bob O’Donnell writes on Recode, “You can’t just assume that IT will be paying for all the new sensors, gateways, networking equipment, [and] analytics hardware and software.” In a prior post, he supports his assertion with some data (always a good idea): 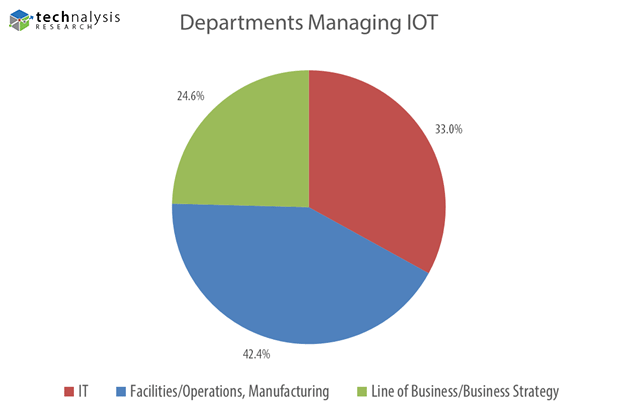 IT need not be involved in each and every technology-related decision.

You may be thinking that the average marketing, sales, or operations exec doesn’t possess the technical know-how to handle complex connectivity, networking, sensor, and data issues. Fair enough, but remember that never before have these employees had access to such a variety of on-demand and robust third-party services. Put differently, IT need not be involved in each and every technology-related decision.

Beyond the increasing ease with which organizations can deploy new services and connect new devices, let’s not forget the elephant in the room. IT departments still have their hands full with traditional responsibilities, not to mention a growing array of security threats. I can’t think of too many IT folks sitting around with nothing to do.