Youtility: An Interview With Jay Baer 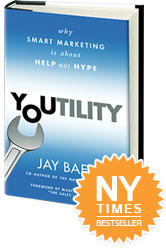 Jay Baer is one of the foremost authorities on marketing and social media, as well as a friend of mine. I’ve quoted him in two of my books. I sat down with him to talk about his new book, Youtility: Why Smart Marketing Is about Help Not Hype.

PS: Other than a nifty word, what is Youtility, really?

JB: Youtility is marketing so useful, people would pay for it. Of course, you probably won’t actually ask customers or prospects to pay, but it’s marketing that has so much inherent value, they would fork over a few dollars if you insisted.

PS: Why would companies want to spend time and money on this, given the number of other priorities they have?

JB: Youtility will not be optional; it will be required. All businesses are now in an unprecedented, hyper-competitive environment where they are competing for attention not just against other businesses, but against EVERYTHING. Think about your Facebook feed, or Twitter feed, or Instagram, or even your email inbox. What you find there is a confluence of personal and professional relationships. Companies are side-by-side with messages from your real friends and family members. That’s an extraordinarily tough marketing environment, having to use the same venues and technologies that we’re using to connect authentically to people we actually cherish.

So, in this information overload arena, companies only have two options to break through that clutter. They can be “amazing” or they can be useful. To me, the culture of “just be amazing” and “be viral” has gone too far. Most companies aren’t amazing, and viral is a strategy of hope. Being truly, inherently useful and creating Youtility is a repeatable, trackable, marketing approach that works.

Companies that are embracing Youtility – and I profile dozens of them in the book – are being rewarded with attention, sales, loyalty and advocacy.

PS: Can you give me an example?

JB: One of my favorites is Columbia Sportswear, the Portland, Oregon–based manufacturer and retailer of outdoor wear and gear. They have a super useful free app called “What Knot to Do in the Greater Outdoors.” It provides detailed instructions for how to tie dozens of knots, including which to use when. The app has forty-eight five-star reviews out of fifty-three total reviews in the Apple iTunes Store. With little marketing support, it’s been downloaded 351,000 times in approximately twenty months.

They conducted research and found it is very common for outdoor enthusiasts to carry smartphones on excursions, thus they built the app to provide useful information to their customers. But this is the key: Columbia doesn’t sell rope.

A big part of Youtility is to transcend the transactional. A app about how to pick out the best jacket isn’t particularly interesting, or useful. But an app that shows you how to tie knots is. Even though it’s not about Columbia products per se, it still matters within the lifestyle context of their customers. You have to give your company permission to make the story bigger, and create Youtility that’s tangential, yet relevant.

PS: It seems like there would be a great deal of doubt in organizations looking to do this, no?

JB: Absolutely. In most organizations, there are two barriers standing in the way of this new type of marketing. One is psychological, and the other is operational.

On the psychological front, the truth is that the tenets of Youtility—making your company inherently useful without expecting an immediate return—is in direct opposition to the principles of marketing and business deeply ingrained in practitioners at all levels. We’ve been trained to think that marketing activities and outcomes follow a linear progression. We’ve been told over and over that we sell more with bigger budgets and better targeting, and by perfecting the crafts of interruption and inbound marketing. Youtility is something entirely different. It requires companies to intentionally promote less at the point of consumer interaction, and in so doing build trust capital that will be redeemed down the road.

In most companies, creating marketing that customers want is a colossal shift from the norm. As a result, many current programs of this type represent the first time the business has tried useful marketing. Because there is no internal history with it, the operational barrier to Youtility centers on roles and responsibilities. Who should be in charge of this? Marketing? Guest Relations? Some other department?

But once you get your organization aligned, you’ll find that Youtility pays dividends over the long-term. Especially since creating programs of this type typically isn’t very expensive.

PS: How important is mobile to programs of this type?

JB: Critical. In fact, the prevalence of smartphones and the fact that always-on Internet access has made us all passive-aggressive is one of the key drivers of the Youtility trend.

It used to be that we created relationships with people. Increasingly, we now create relationships with information, because engaging in a synchronous exchange via phone (or even email) is too much of a hassle for both parties. Customers want to do the research online themselves, because they have the ability to do so at any time from the palm of their hands. Why would you want to have a sales rep call you until you’ve exhausted all the freely available online information first?

And in fact, Sirius Decisions’ research finds that in B2B – where this trend is most impactful today – customers contact a company only after 70% of the purchase decision has been made. The sales team used to be top of the funnel. Now they get involved mid-funnel or later. It’s a huge shift.

Read more about Jay at his site.