The interface was unmistakable, but the context threw me for a loop.

Yes, I was looking at Windows XP—the operating system that Microsoft decommissioned a long time ago.

At the freakin’ Apple Store.

Curious and maybe a tad nosy, I struck up a conversation with the kindly woman who had schlepped her massive iMac, SuperDrive, and CDs to the closest Apple pantheon. Let’s call her Betty here. 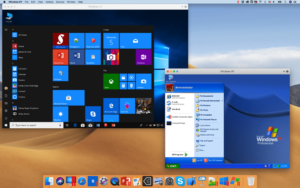 I asked Betty if she was running Parallels—the software that allows users to create virtual machines and run non-Mac programs. Yes, as a matter of fact, she was. (My next guess would have been Bootcamp.)

She seemed interested in chatting for a few minutes while we both waited at the Genius Bar. I asked her which software program required so many Band-Aids. Betty told me that she was a piano teacher. More than a decade ago, she had purchased a program that she still used to teach her students. I knew where she was heading…

Unfortunately, the vendor stopped supporting the legacy version. The company now wanted its customers to upgrade to its latest version and, in the process, pay monthly subscription fees. In other words, welcome to the world of software-as-a-service.

Betty wasn’t having any of it. If her stance meant that she had to jump through hoops to use the old application, so be it. I suspect that she’s hardly the only music teacher to feel that way.

I understand that mindset all too well. I have seen many organizations stick with what—kind of—still works, even though its technologies were long in the tooth. On a personal level, when I moved to Sin City in 2011, I did something very similar. At the time, I was still relying upon my old PC to run my accounting program. (Oh, Wave, where were you then?) More recently, I only reluctantly upgraded TextExpander because the idea of a monthly charge didn’t sit well with me.

Before departing the store with yet another AirPod case (seriously, Apple?), I wished Betty good luck and told her that, eventually, she’d have to rip the Band-Aid off. At some point, something was going to break—and no single company could offer a solution. For instance, Parallels wouldn’t support XP. It’s not like she could visit the local Microsoft Store for a solution. (Hey, at least she’s not in the ATM business.)