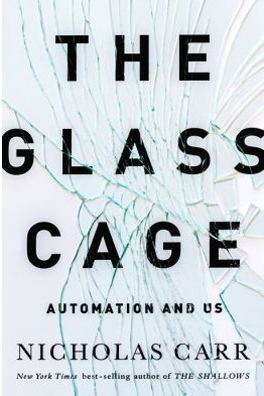 In five years, will your doctor be taking orders from a tablet and an algorithm? It sounds farfetched, but cost pressures and technological advances are leading us down that very road.

Google is one of several companies trying to bring driverless cars to the masses. Sophisticated CAD programs are changing the very essence of architecture—and not necessarily for the better. Human skill is less important than ever in farming, manufacturing, and flying a plane. Some people believe that pilotless planes represent the future. Home Depot is testing robot “employees”, the recent subject of an absolutely hysterical Last Week Tonight skit. (For my money, Jon Oliver hosts the best newsy show on TV right now, but I digress.)

Far less understood, though, is where all of these newfangled devices, software programs, and systems are taking us. Against this backdrop, I recently read Nick Carr’s The Glass Cage: Automation and Us. (Disclaimer: His publisher sent me a copy gratis.)

Where are we going?

The Glass Cage is neither an anti-automation screed nor a polemic. The two-fold premise of the book is both profound and simple: a) to help us understand how we got to now, to paraphrase Steven Johnson’s latest book; and b) to question whether our direction is wise.

Just because we can automate something doesn’t meant that we should.

Like his other texts, Carr has clearly done a great deal of research. There’s the obligatory story of the Luddites. That much I expected. I figured that Carr would mention cleaning robotic vacuums. Ditto for Google’s autocomplete feature. I was unaware, however, of the extent to which many other facets of daily life are being automated (read: architecture, air travel, and medicine). It’s either cool or scary, depending on your point of view. Maybe it’s a bit of both.

Carr questions the the libertarian ethos so prevalent in today’s Silicon Valley. More than ever, we view disruption as an unalloyed good. AirBNB and Uber are cases in point. For several reasons, though, all of this technology should give us pause. First, are these new, automated experiences better and safer than their predecessors? Carr points to research that questions and/or refutes both claims.

Even if we take these improvements for granted, what are the human ramifications? Not too many people seem to be asking question such as:

Carr manifests the drawbacks of automation. He both implicitly and explicitly asks critical questions like these throughout The Glass Cage. Brass tacks: Just because we can automate something doesn’t meant that we should.

Near the very end of the book, Carr drops an interesting piece of knowledge. The word robot derives from the Czech term for servitude. It’s a fascinating double entendre. Automation is increasing faster than ever, fueled by technological, economic, and societal factors, a trend with no signs of abating. The Glass Cage forces the reader to think about where we’re going, how fast, and what it all means.