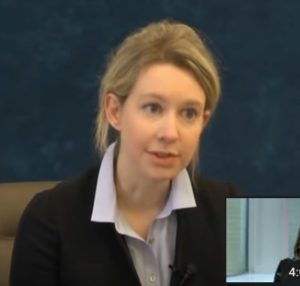 One of my favorite books of 2018 was Bad Blood by John Carreyrou. In a nutshell, the Wall Street Journal reporter’s riveting text details Theranos’ massive fraud. Led by borderline psychopath and notorious micromanager Elizabeth Holmes, the company bilked investors and partners hundreds of millions of dollars.

I blew through Bad Blood in a little over a day, horrified at the extent of criminal activity that took place. Equally fascinating to me, Holmes and Ramesh “Sunny” Balwani cultivated a workplace predicated on intimidation. Yes, he and Holmes used illegal surveillance methods and showed no regard for the law, let alone ethics.

Against this backdrop, I found the following Nightline interview with the disgraced ex-CEO to be utterly incredulous:

Read Bad Blood and you’ll quickly understand that nothing occurred at Theranos without Holmes’ explicit approval. The term micromanager is entirely apropos. The very idea that she was blissfully unaware of anything at her baby doesn’t come close to passing the smell test.

Critical thinking is more important than ever.

Sure, CEOs such as Steve Jobs (Holmes’ idol) perpetuated their own reality-distortion fields. Ditto for Elon Musk and his companies.1 At least those iconic leaders, though, were/are generally trying to do something good. As Theranos imploded and even to this day, Holmes reportedly remains oblivious to the consequences of her actions. Case in point: She wants to start a new company and is attempting to raise funds in Silicon Valley. Good luck with that.

I for one cannot wait for Alex Gibney’s forthcoming HBO documentary. Here’s the trailer:

As part of the W. P. Carey curriculum, my students will soon learn about Enron and its brethren from nearly 20 years ago if they haven’t yet already. As I tell my them from day one of my courses, ours is a particularly chaotic world. Critical thinking is more important than ever—and I demand it. All students should take claims with a grain of salt and, in Holmes’ case, an industrial-sized bag of it.

Brass tacks: If you can’t to the time, don’t do the crime.