Why I Cut the Cord

I finally did it.

Today, I cut the cord with my cable provider. Bon voyage Cox Communications. (This is part of a personal streamlining project of sorts. A few months ago, I killed my intermittent Nextiva landline and haven’t missed it one iota.)

Like millions of people, I have been less than satisfied with my cable experience over the years. Back in my New Jersey days, my Comcast cable service was hardly flawless, not that was alone in my disgruntlement. The cable industry has long earned the wrath of its customers and it consistently ranks among the most hated of all US industries. I suspect that a decent percentage of all cable-related tweets resembles this one:

Give Cox credit for at least responding to customer tweets.

Of course, dissatisfaction and action are two very different things. Five years ago, tablets hadn’t yet made major inroads. What’s more, legitimate cable alternatives were pretty lacking. (I suppose that piracy has always been an option, but I’ll focus on legal options here.) Sure, Netflix, Hulu, YouTube, and iTunes provided a decent amount of content, but collectively they weren’t enough to convince a critical mass of people to cut the cord. No access to HBO alone was a deal-breaker for many.

Today, though, that’s no longer the case. Case in point: Roughly 5 million people have said no to cable–and that number is only increasing. On a personal level, two of my best friends cut the cord over the past six months. Because of their experiences with cable companies, many if not most people are more than happy to share their own recommendations on services like Roku: 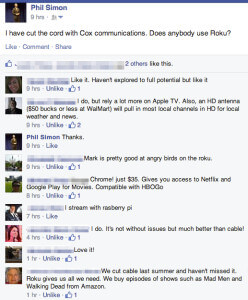 Customers and Users Are Not Synonyms

Color me crazy, but I didn’t mind paying Cox $140 every month for my package. After all, I used DVR on two TVs with HBO and a few other premium channels. Customers who fork over that kind of money, though, aren’t lacking for expectations. (Read: the service actually has to, you know, actually work.)

Lamentably, my Cox problems had intensified in the past year. The occasional credit aside, I’m not about to call any provider twice a month to discuss a new or recurring issue. Occasional outages happen, but if a company can’t provide reliable service, adios. As I’ve said many times, there’s a world of difference between customers and users.

Friday night, I reached my tipping point. I sat down to watch the four episodes of the critically acclaimed show Fargo that I had taped while traveling during the week:

I had recorded those episodes on my Cox DVR, or so I thought. Trying to play each one resulted in an “Episode not available” error. There was no way that I was going to buy these episodes (again) on Amazon Prime. Paying for them once is plenty for me.

Three industries are particularly ripe for massive disruption: education, healthcare, and telecomm. Think that it can’t happen? Think again. AOL, Yahoo!, Dell, Microsoft, Kodak, MySpace, and Polaroid at different points occupied dominant positions in our world. Today, they are struggling to different extents and the latter three are irrelevant.

To Cox and the rest of the cable companies: Be afraid. Be very afraid.