When Dataviz Manifests the Obvious 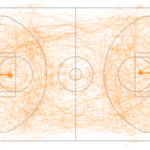 It’s easy to geek out on data and dataviz these days. One major potential time-suck: Deadspin Regress.

Of particular interest to me was this recent data visualization of NBA players’ movement created via SportVU. The tool does a number of things, some of which are more interesting and revealing than others. The Deadspin article manifests how, thanks to SportVU, anyone can visualize where NBA players move on the court during the course of a game.

As the article illustrates, this visualization isn’t terribly insightful. You won’t find five-time NBA champion Tim Duncan of the Spurs hanging out at the 3-point line very often. As a true big man, he tends to play close to the post. (For more on advanced NBA analytics, click here.)

Now, did you need a fancy dataviz tool to tell you that? Perhaps not. Maybe you watch a great deal of basketball and instinctively know that he never takes three-pointers. In his 17-year career, he’s taken well under 200 total threes. Hell, that’s an average month for Warriors’ sharpshooter Steph Curry.

Data visualizations don’t guarantee a thing. Don’t let that stop you from using them.

The point here is that data (Big, Small, or whatever you want to call it) often confirms what we already know. And so do data visualizations. What’s more, as I write in The Visual Organization, “The notion that a dataviz–no matter how good–guarantees a new insight or successful outcome is simply ludicrous.”

The explosion of data and democratization of tools with which to analyze them are mixed blessings. Yes, there’s a signal in that noise, but often Big Data scares and overwhelms many of us. It’s easy to drown in the data deluge. I understand all too well the desire to shut down, to ignore potentially new sources of data–and ways to analyze it.

Fight the urge to flight. Don’t let the fact that useless nature of many data visualizations prevent you from asking important questions. Plus, even if nine of ten assumptions are confirmed, what happens when the tenth is proven incorrect? What if that new insight shakes the foundation of your new marketing campaign or even business model?