The Case for Early Student Evaluations

How feedback at the start of the semester can help nip issues in the bud.

Jul | 8 | 2018

Higher Education

In This Post, I Make the Case That Professors Should Not Wait Until the End of the Semester to Solicit Student Feedback. as You’ll See Below, It’s Easy for Faculty to Anonymously Collect Student Responses and Manifest Problems That May Haunt Us Over the Course of the term.

Software developers have embraced Agile methods such as Scrum for decades. Their benefits are manifold. Perhaps most important, they allow for quick feedback and process improvement. Put differently, they resemble closed loops. (Consider a thermostat. If you set the temperature at 72°, then that’s where it should stay. Always.)

Generally speaking, Scrum teams are able to produce software better and quicker than teams following the Waterfall model. On the latter types of project, there’s no real opportunity to fix issues because the project is theoretically over. (Consider a washing machine. You don’t know until the end of the cycle that you forgot to add the detergent and fabric softener. By then, it’s too late.)

After my first semester, I received some slightly surprising student evaluations.1 It dawned on me that I could embrace the notion of a closed loop with my students. That is, instead of relying upon end-of-the-semester feedback, I could obtain some only a few weeks in.

In the spirit of improving my teaching, here’s what I have done in every semester since my inaugural one: Within the first few weeks of class, I send anonymous student surveys via Google Forms to nip any potential issues in the bud. Here’s a screenshot: 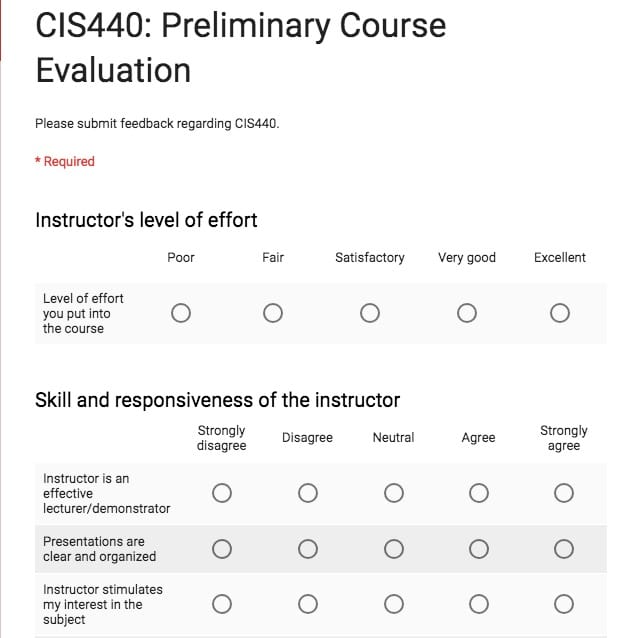 I also include several text-based, open-ended questions about what I could do better. Note that the survey is completely anonymous. This is essential.

Here are the results of the three-question survey from my summer CIS440 course. Click on the arrows to advance the slides: 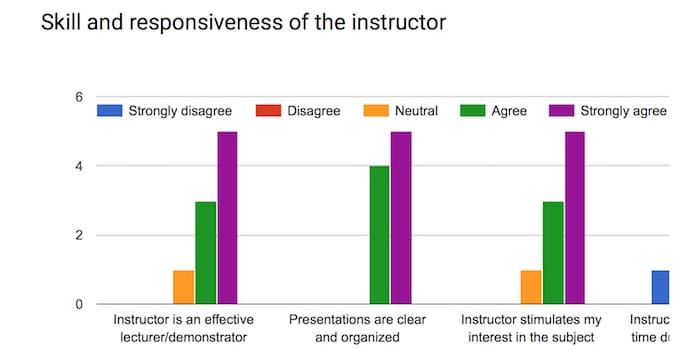 Some students will object no matter what you do.

These evaluations allow me to possibly address problems or criticisms as soon as possible. I qualify that statement for two reasons. First, as I learned early on, some students will object no matter what you do, especially if you hold them accountable to learning outcomes. Second, I do not exert complete control over the course topics and assignments. For instance, there’s not much that I can do in a capstone course to allay students who despise group-based work.

I’ll be the first to admit that this method isn’t perfect. Most glaringly, it probably suffers from selection bias. That is, because the survey isn’t mandatory, I’m not receiving a representative sample of responses. This could certainly skew the results. Second, even with the results, I know that I’m not going to make every student happy. (Case in point: One student in particular clearly is not a fan of my course and my teaching style.) Still, checking the temperature as it were gives me confidence that I’m on the right track. A 50-50 or even 60-40 split between positive and negative responses would give me pause.

Limitations aside, I have found that early student evaluations increase the chances of identifying nascent issues—particularly from introverted or disengaged students. I then stand a better chance of addressing them and not being shocked at the end of the term.