Fed up with my recurrent VOIP and Internet problems, I have decided to take Comcast to task. Long lauded for its proactive approach to using social media in a customer relations’ context, Comcast has a Twitter account created specifically for dealing with unhappy customers.

Around 8 am on Saturday morning, after a predictably unsuccessful call to customer relations, I decided to tweet my way to satisfaction–or at least try. 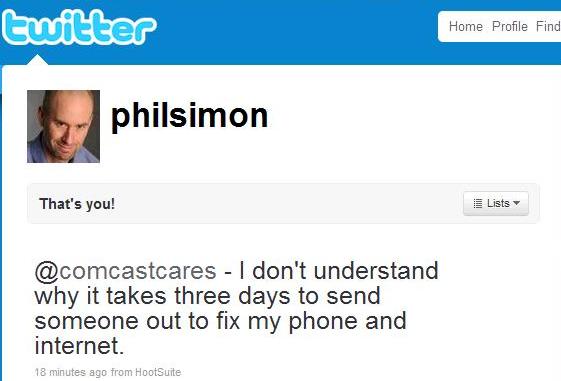 And I sent them an email to boot: 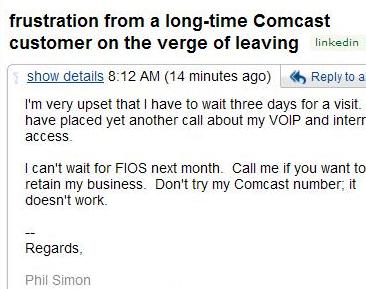 I gave them my number.  Really.  Truly.

A few minutes later, I decided to go all in and put this on Facebook as well:

To paraphrase Otter from Animal House, “I put it to you, Comcast.” Let’s see if you’re up to the challenge.  Game on.

I’ll be updating this post and tweeting its progress.  Stay tuned …

Well, I have my first comment on my blog, but not from Comcast.

Three hours and nary an email or direct Twitter message.  What gives?  How does Comcast at least not have an autoresponder on this email address? Maybe I should go “old school” and get a land line?

I’m adding a poll as well to make this as interactive as possible.

I had placed a call with Comcast at 7 am, hoping to get someone to come to my home today. Monday was the earliest possible day, the rep told me.  I asked if he could call me should that changed and he promised a call back within an hour.

I sincerely doubt that anyone managing either the Comcast Cares Twitter account or the related inbox called the local rep. Is it possible? Sure …why not?

At this point, I just want to see if my Tweets or email is acknowledged. So, in a way, the point of my experiment has changed from its original intention: fixing the problem. I’m now intent on seeing if anyone merely listens. 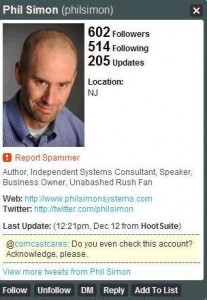 In no particular order, I have a bunch of questions:

1:26 pm: The Plot Thickens and a Social Media Noir

I checked my Twitter followers to find that I have been acknowledged on some level (although this may have been an “autofollow”): 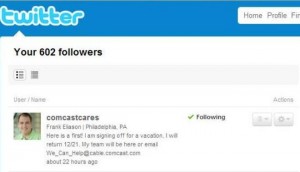 I can’t decide if this is an autoresponse or Frank’s team:

Here is a first! I am signing off for a vacation. I will return 12/21. My team will be here or email [email protected]  about 22 hours ago

Interesting …  Perhaps I’ll get tired of this soon but, in between errands, this isn’t a bad way to pass a cold Saturday here in New Jersey.

This is getting to be quite the social media noir.

I’ve decided that six hours is plenty of time for at least some type of acknowledgment. I am pulling the plug on my Comcast Social Media Experiment. Maybe my next one won’t be with Comcast. Some management type once said, “Listen to your customers or someone else will.”

Shame on you, @comcastcares.  I can only assume that no one’s minding the store or too many people are tweeting you about poor service.

Wow …  My tweets have found their mark after all. 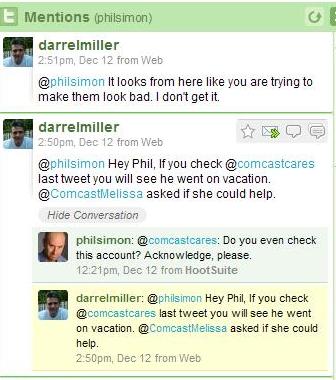 The irony is that my sporadic Internet connection makes receiving  these in real time tough.  Oh yeah, I have an email alert and a CrackBerry.  I know that Frank went on vacation but I sure hope that his vacation didn’t mean that the whole team wouldn’t respond.

Comcast has 600,000 VOIP users in NJ, according to their rep, and I don’t see how one guy could handle NJ, much less the entire Comcast customer base.

Someone checked an email or tweet. Someone from some executive office somewhere in the Comcast Kingdom called me to advise that someone will, in fact be here by 5 pm.  I only wish that it didn’t take over seven hours to contact me.

I have learned the following from this experiment: