Around this time a quarter century ago, I graduated from Carnegie Mellon although I walked in May of 1994.

Twenty-five years is a long time. On many levels, today I barely recognize the young man who wore that cap and gown.

As I celebrate that anniversary, in this post I’ll reflect on the most important things that I picked up during my time at CMU and how they have helped me throughout my career. 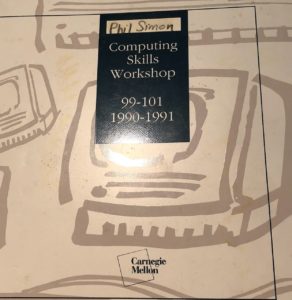 As the saying goes, at Carnegie Mellon even the poets know how to code. I would imagine that that remains true today. (In case you’re curious, I didn’t study poetry.)

My first semester I had to take Computer Skills Workshop. In hindsight, that course and a few others helped me understand software and devices that would ultimately change the world.

Of course, one can use computers and programs differently. Styles vary. I remember learning early at Carnegie Mellon about the benefits of keyboard shortcuts. Sure, it took time to learn them, but in the long term they save users a great deal of time. I have never forgotten that lesson. To this day, I eschew using my mouse on my computer whenever possible and even record custom shortcuts on my Mac. I frequently noodle with new product features like Siri shortcuts.

What’s more, CMU taught me the importance of learning new tools—something that I’ve carried with me. Exhibit A: Using Slack in the classroom.

The same comfort holds true with data. I’ve never been afraid to look at data to either diagnose a problem or find a better solution. In fact, I’ve expected it. Looking at data is like breathing to me; I do it and don’t really think about it.

Make no mistake: Plenty of folks reject mind-set. I’ve come across more than my fair share of dataphobes in my career. To the extent that the world is more data-driven than ever, I’m glad that the 18-year-old version of me learned to embrace data. In retrospect, it helped my pre-academia career immeasurably, but why stop there? I frequently look at an interactive Tableau data visualization of my student evaluations to see how I’m doing and where I can improve.

Learning How to Learn

I would be remiss if I didn’t mention my first proper programming class because it illustrates a larger lesson. If you’re of a certain age, then you’ll probably laugh when you read this: At Carnegie Mellon, I learned how to code in Pascal.1

I’m glad that I learned to embrace data when I was impressionable.

I don’t know of a single university that still teaches that moribund language. Nevertheless, I’m still glad that I took that course nearly 30 years ago. It turns out that, while programming languages change, many concepts remain pretty constant.

For instance, Pascal supported for loops—essentially, a way for software to iterate through a potentially unknown number of steps until it achieves a desired outcome. If you think that concept remains useful today, you’re right. Modern-day, general-use programming languages allow you to do the very same thing. Case in point: When teaching Intro to Information Systems – Honors this semester, I spent nearly two weeks covering the basics of Python. This included—you guessed it—for loops. (I even had some fun creating examples in class.)

I can think of other programming languages that I picked up over the course of my career. SQL and HTML most readily come to mind. The point is that at Carnegie Mellon I learned how to learn. I stress the importance of lifetime learning each semester to my students at ASU. I hope that they are listening.

Facility with data often goes hand-in-hand with critical thinking—a skill that has only increased in import in the last quarter century.

I remember a project on which I worked in 2008. To make a very long story short, a hospital hired me to solve a particularly thorny data problem that was flummoxing a team of high-priced consultants.2

The project involved corralling, aggregating, and analyzing a boatload of data from disparate sources. To be sure, the sheer complexity of the work hurt my head a few times. Still, I diligently made progress and ultimately solved the problem. In part, I have Carnegie Mellon to thank for imparting the requisite skills to me.

When I attended Carnegie Mellon, student-retention rates weren’t spectacular although they have since improved. The usual suspects back then included its cost, heavy workload, and an, er, challenging social environment.3 Brass tacks: Graduating from Carnegie Mellon wasn’t easy and some of my friends didn’t make it.

Fortunately, I didn’t have to bear the financial burden of my college years. I’ll focus here on CMU’s substantial workload. I can’t recall a single easy class at Carnegie Mellon. Because my parents footed the bill, I felt compelled to go all in. That meant:

As a result, I received high marks and graduated with university honors.

I like to think that I’m a humble guy. (Playing golf will do that to you.) Still, I’m proud that I was able to succeed at one of the nation’s premier institutions. The lesson for me is that I know that I’m capable of accomplishing my goals if I do the work. If I experience doubts, as I did at one point writing Why New Systems Fail, I remember my time and accomplishments at Carnegie Mellon.

An Appreciation for Multiple Disciplines

Sure, I love technology and data. Still, I don’t believe for one minute that they are the answer to every problem. In fact, often each exacerbates current issues or causes new ones altogether. For instance, fake news existed prior to Facebook; the social network just gave, er, interested parties a better method for disseminating bile. (Insert obligatory Kranzberg quote.)

There’s much more to say about this and I’m sure that I’ll elaborate in future blog posts and possibly even a book at some point. Let’s just say that I take an interdisciplinary approach to writing books, solving problems, thinking about things, etc. It has served me well.

Final Thoughts: Carnegie Mellon never treated me as a customer and I couldn’t be happier.

My favorite line in this debate comes from Jeff Gentry. He currently serves as the Dean of the College of Fine Arts at Eastern New Mexico University. In an astute article for The Chronicle, he writes:

My customer is the you 10 years from now, who is going to thank me for upholding college-level standards.

Gentry could not be more right.

In hindsight, my professors and the administration viewed me as a product, not a customer. They never coddled me. I placed my trust in a school, its administration, and my professors, 25 years later, I’m glad that I did. That faith has served me well throughout my career.

What lessons have you took with you from college? If you’re currently studying, what do you expect to say about it 25 years from now?